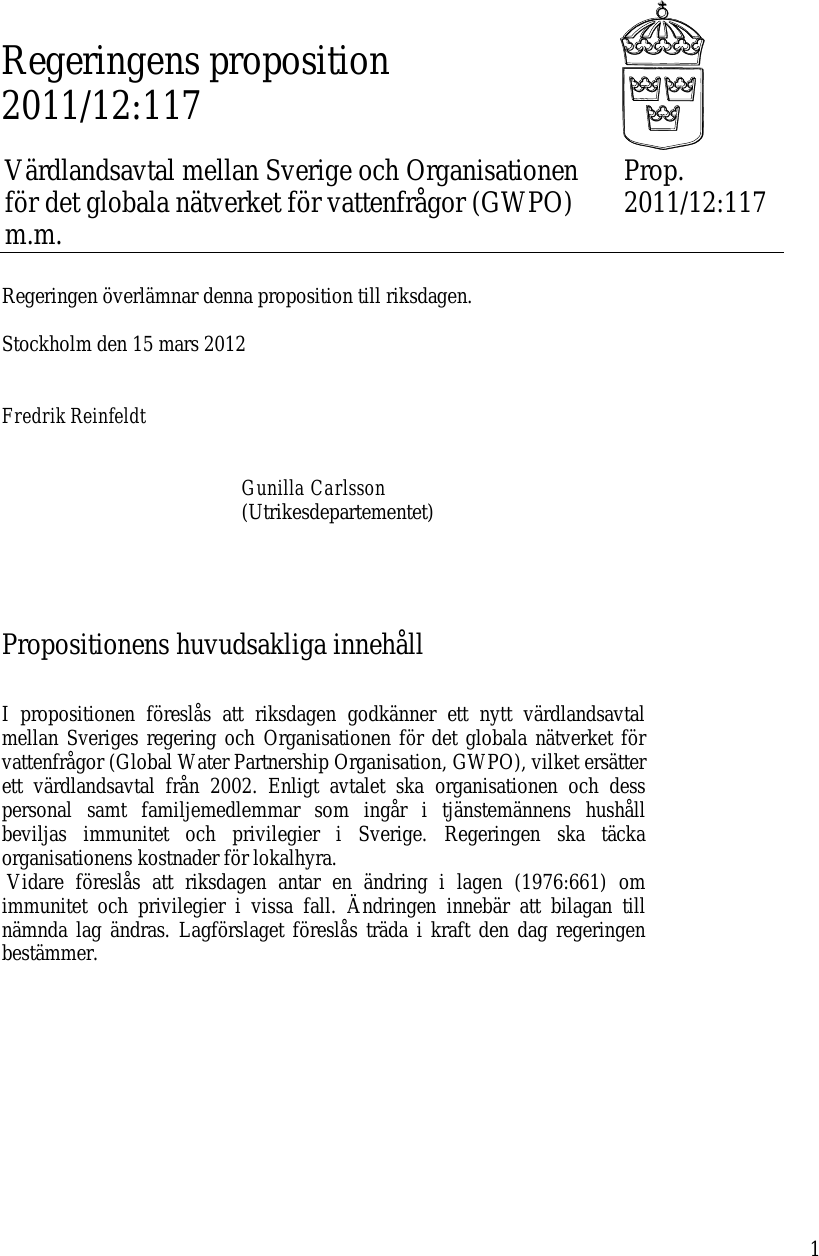 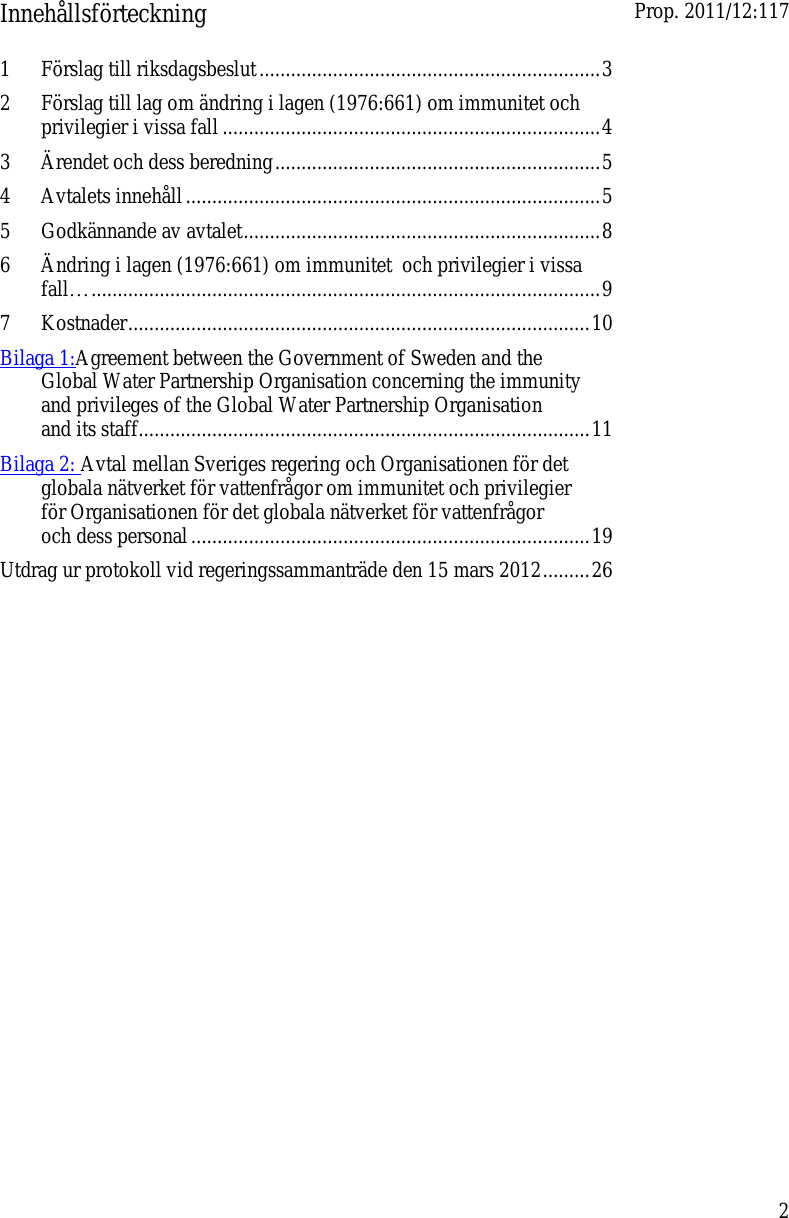 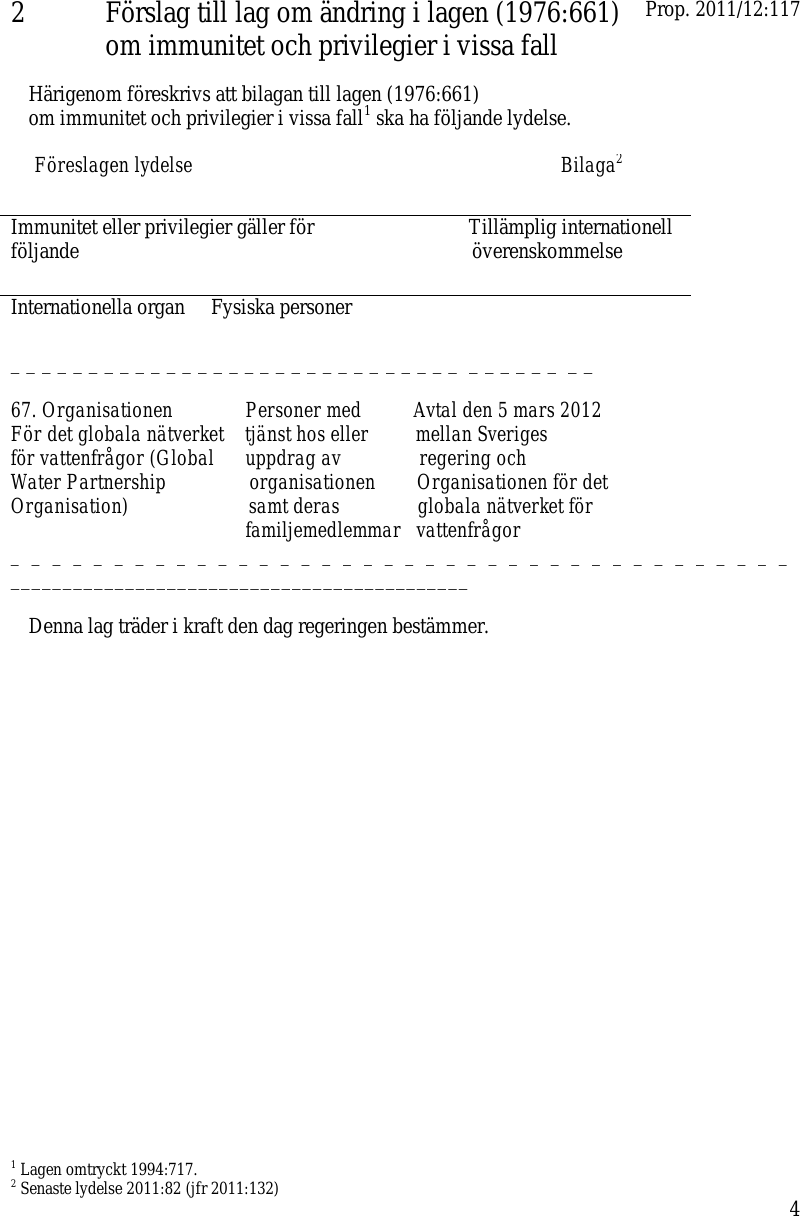 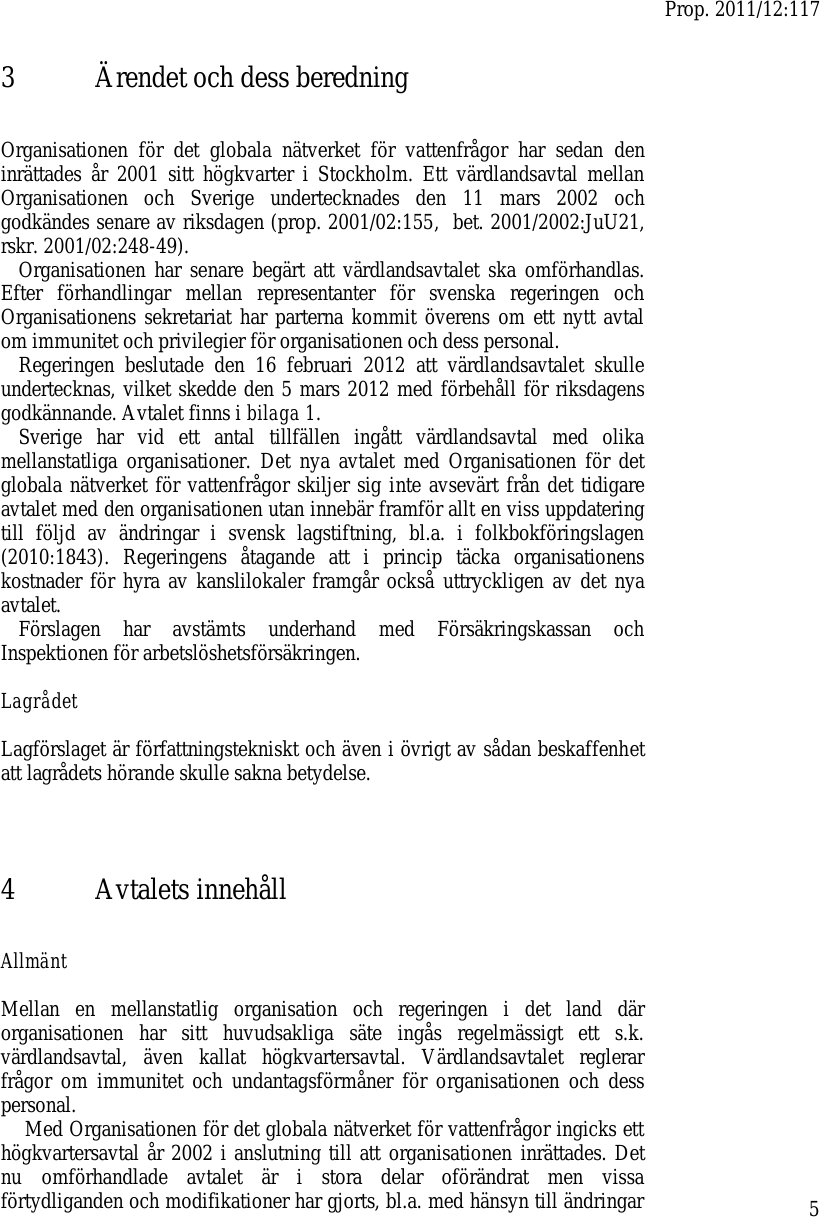 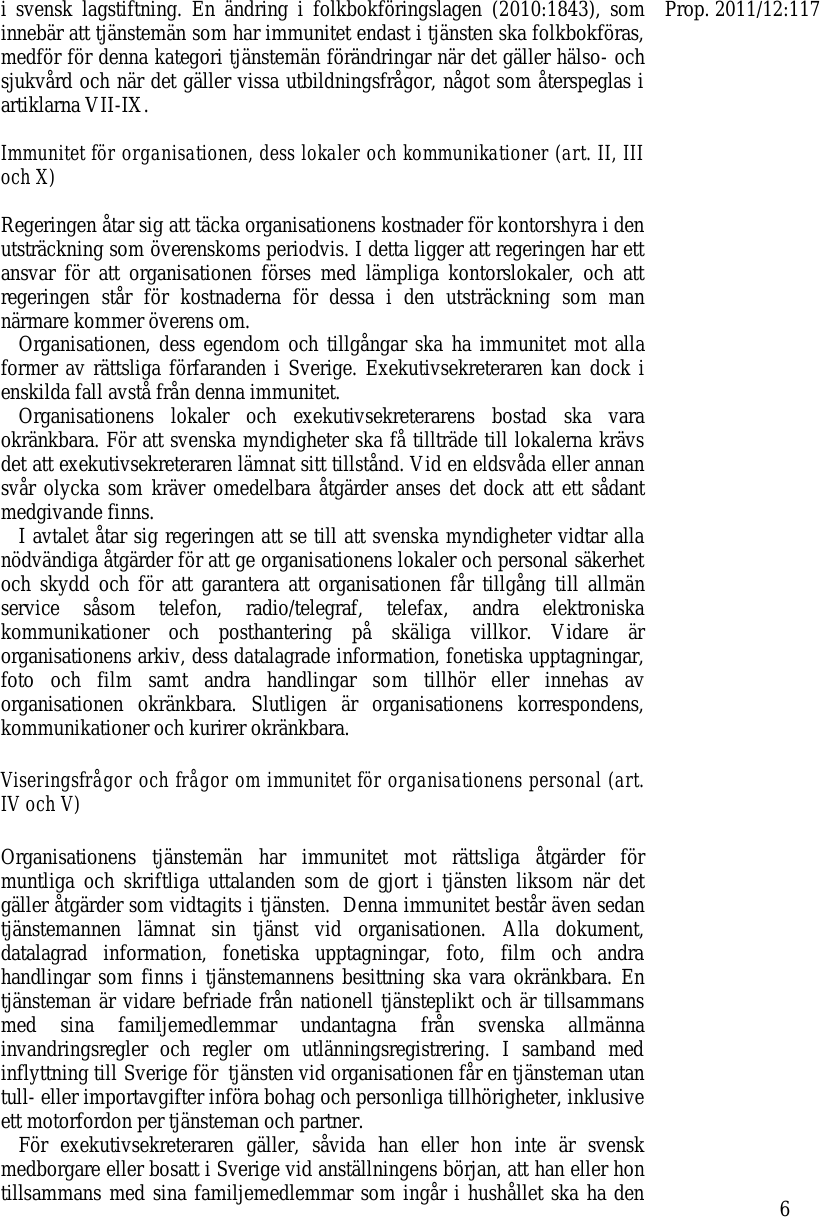 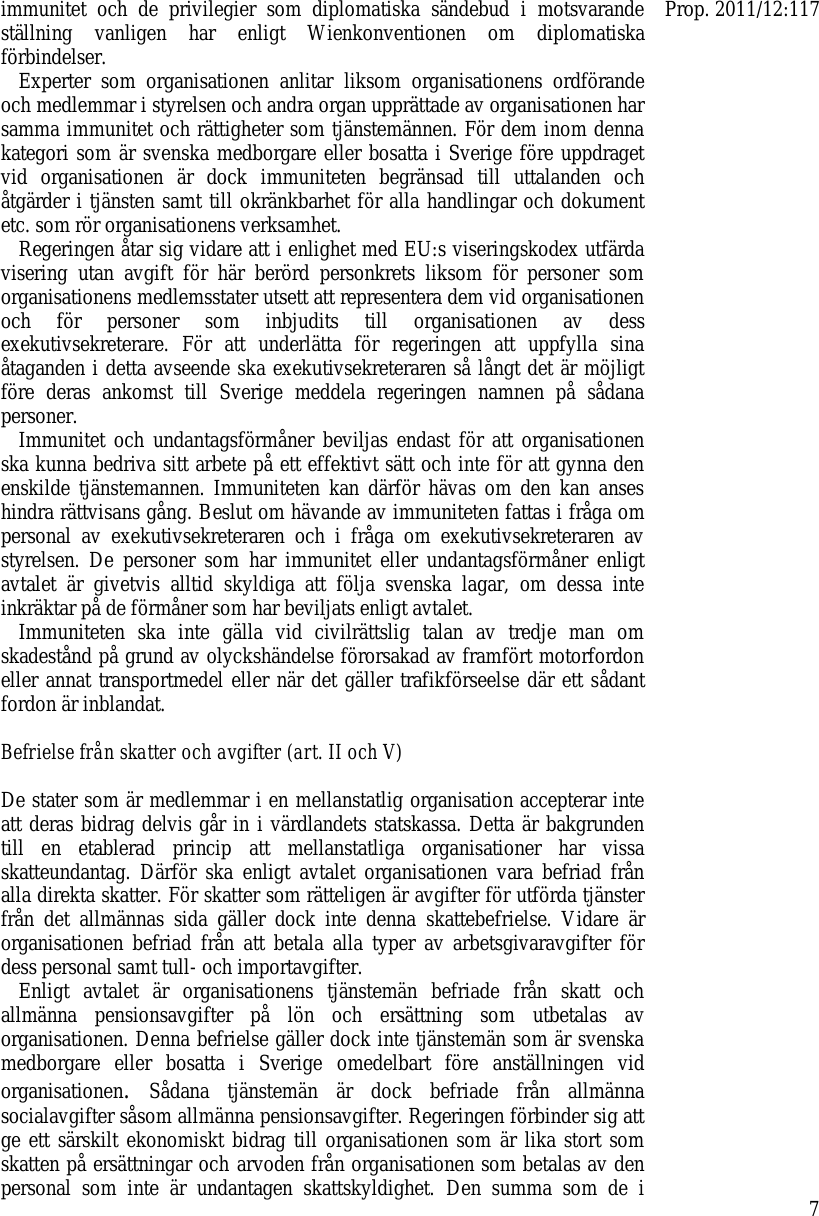 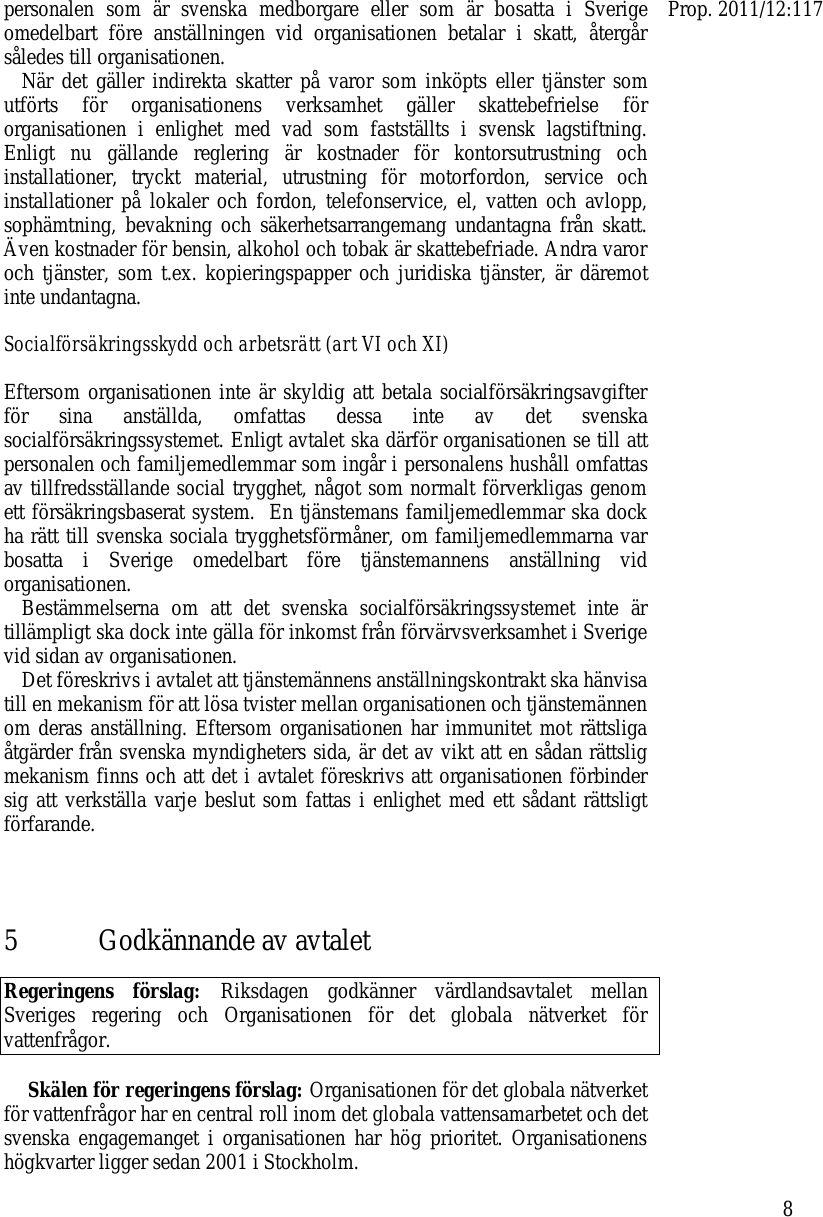 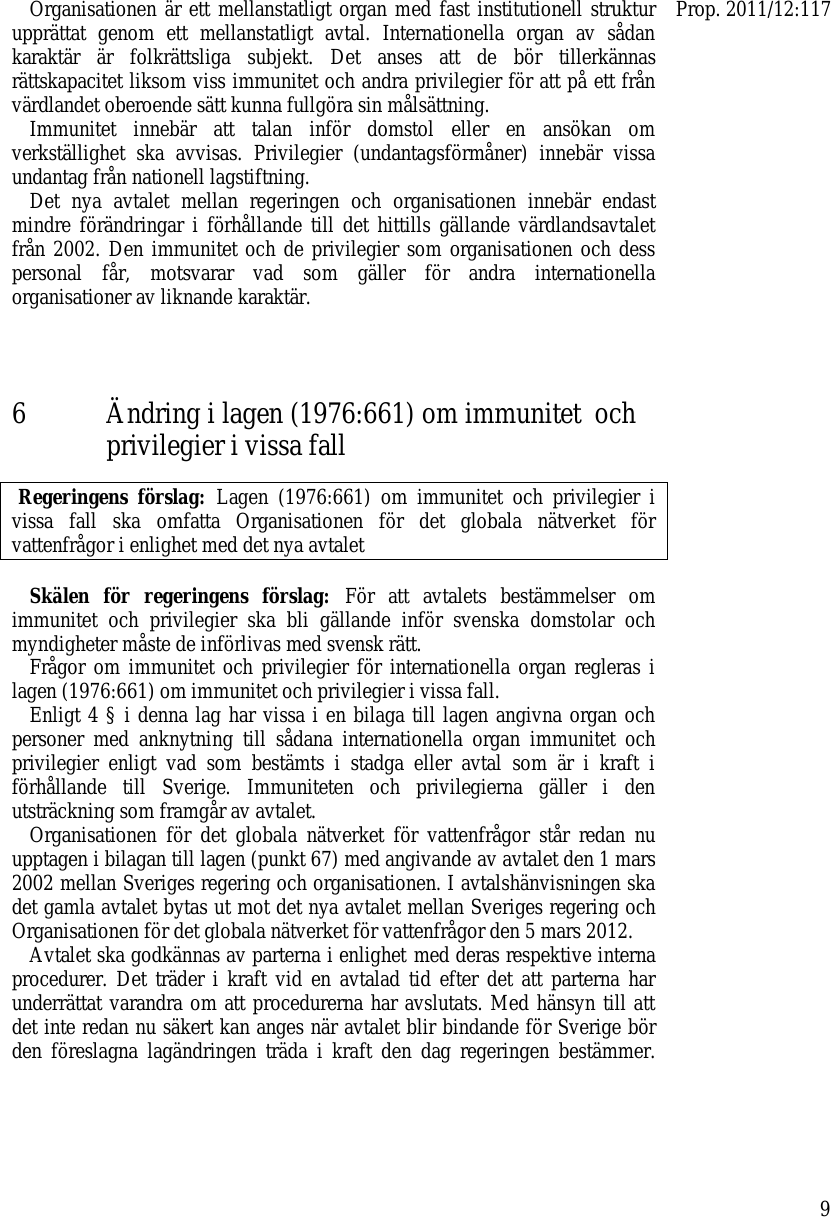 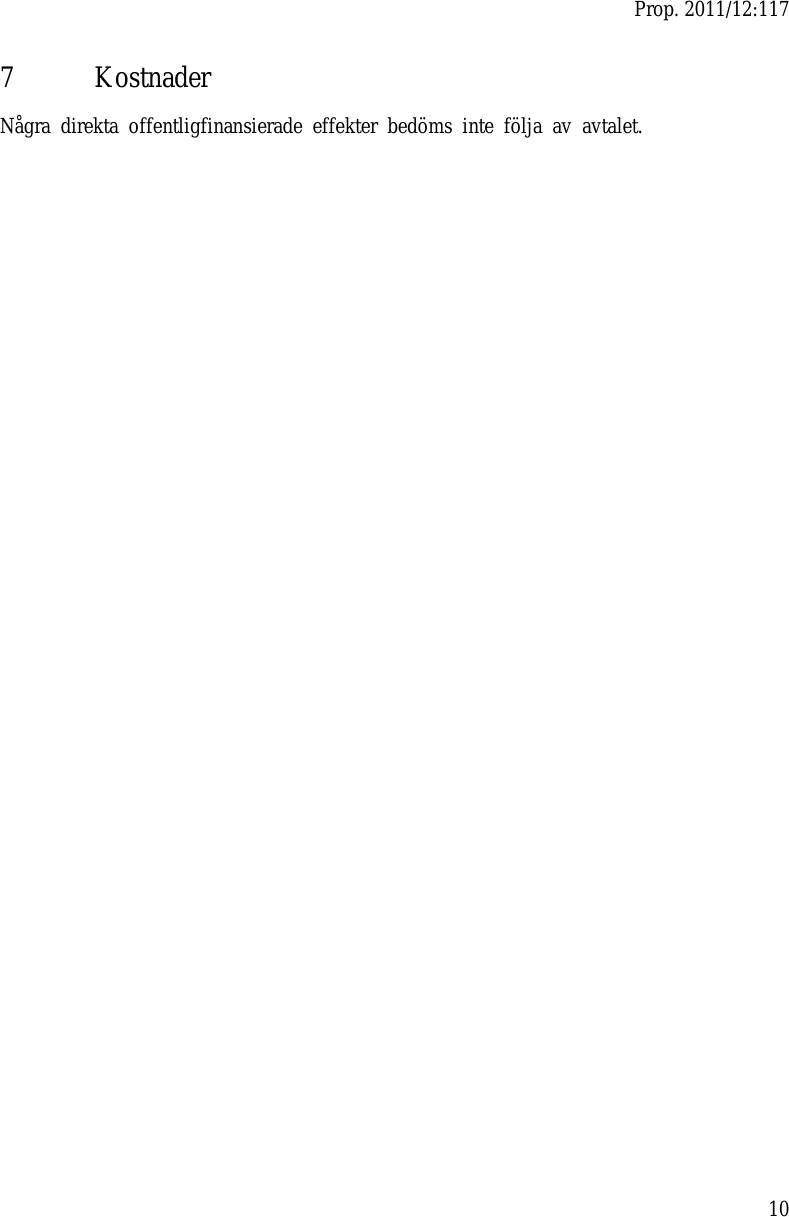 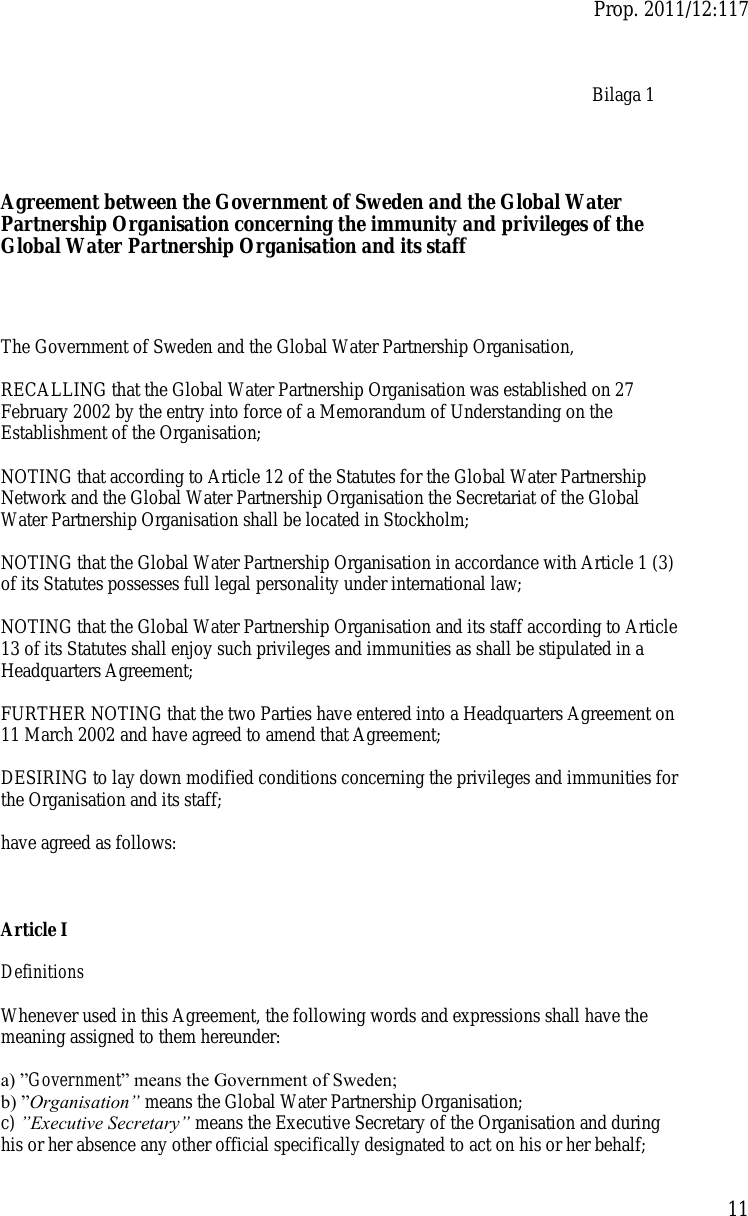 The Government of Sweden and the Global Water Partnership Organisation,

RECALLING that the Global Water Partnership Organisation was established on 27 February 2002 by the entry into force of a Memorandum of Understanding on the Establishment of the Organisation;

NOTING that the Global Water Partnership Organisation in accordance with Article 1 (3) of its Statutes possesses full legal personality under international law;

NOTING that the Global Water Partnership Organisation and its staff according to Article 13 of its Statutes shall enjoy such privileges and immunities as shall be stipulated in a Headquarters Agreement;

FURTHER NOTING that the two Parties have entered into a Headquarters Agreement on 11 March 2002 and have agreed to amend that Agreement;

DESIRING to lay down modified conditions concerning the privileges and immunities for the Organisation and its staff;

have agreed as follows:

Whenever used in this Agreement, the following words and expressions shall have the meaning assigned to them hereunder:

a) ”Government” means the Government of Sweden; 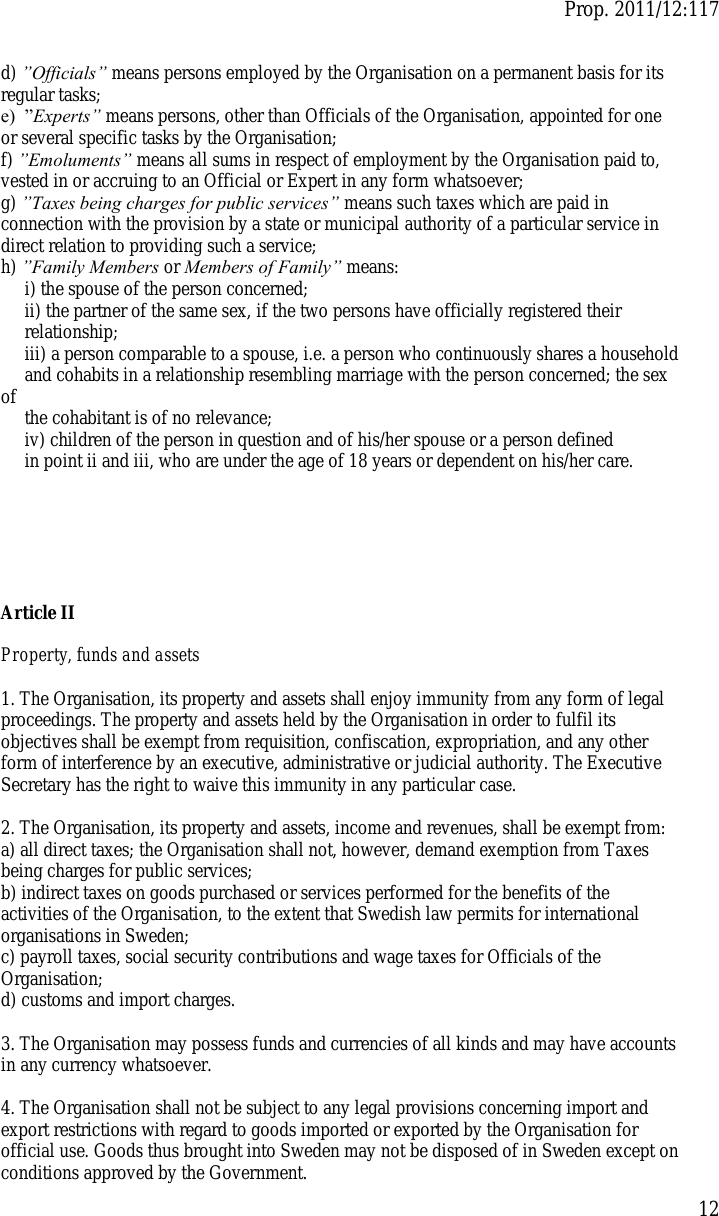 d) ”Officials” means persons employed by the Organisation on a permanent basis for its regular tasks;

f) ”Emoluments” means all sums in respect of employment by the Organisation paid to, vested in or accruing to an Official or Expert in any form whatsoever;

g) ”Taxes being charges for public services” means such taxes which are paid in connection with the provision by a state or municipal authority of a particular service in direct relation to providing such a service;

i) the spouse of the person concerned; ii) the partner of the same sex, if the two persons have officially registered their relationship; iii) a person comparable to a spouse, i.e. a person who continuously shares a household and cohabits in a relationship resembling marriage with the person concerned; the sex of the cohabitant is of no relevance; iv) children of the person in question and of his/her spouse or a person defined in point ii and iii, who are under the age of 18 years or dependent on his/her care.

1. The Organisation, its property and assets shall enjoy immunity from any form of legal proceedings. The property and assets held by the Organisation in order to fulfil its objectives shall be exempt from requisition, confiscation, expropriation, and any other form of interference by an executive, administrative or judicial authority. The Executive Secretary has the right to waive this immunity in any particular case.

2. The Organisation, its property and assets, income and revenues, shall be exempt from:

a) all direct taxes; the Organisation shall not, however, demand exemption from Taxes being charges for public services;

b) indirect taxes on goods purchased or services performed for the benefits of the activities of the Organisation, to the extent that Swedish law permits for international organisations in Sweden;

3. The Organisation may possess funds and currencies of all kinds and may have accounts in any currency whatsoever.

4. The Organisation shall not be subject to any legal provisions concerning import and export restrictions with regard to goods imported or exported by the Organisation for official use. Goods thus brought into Sweden may not be disposed of in Sweden except on conditions approved by the Government. 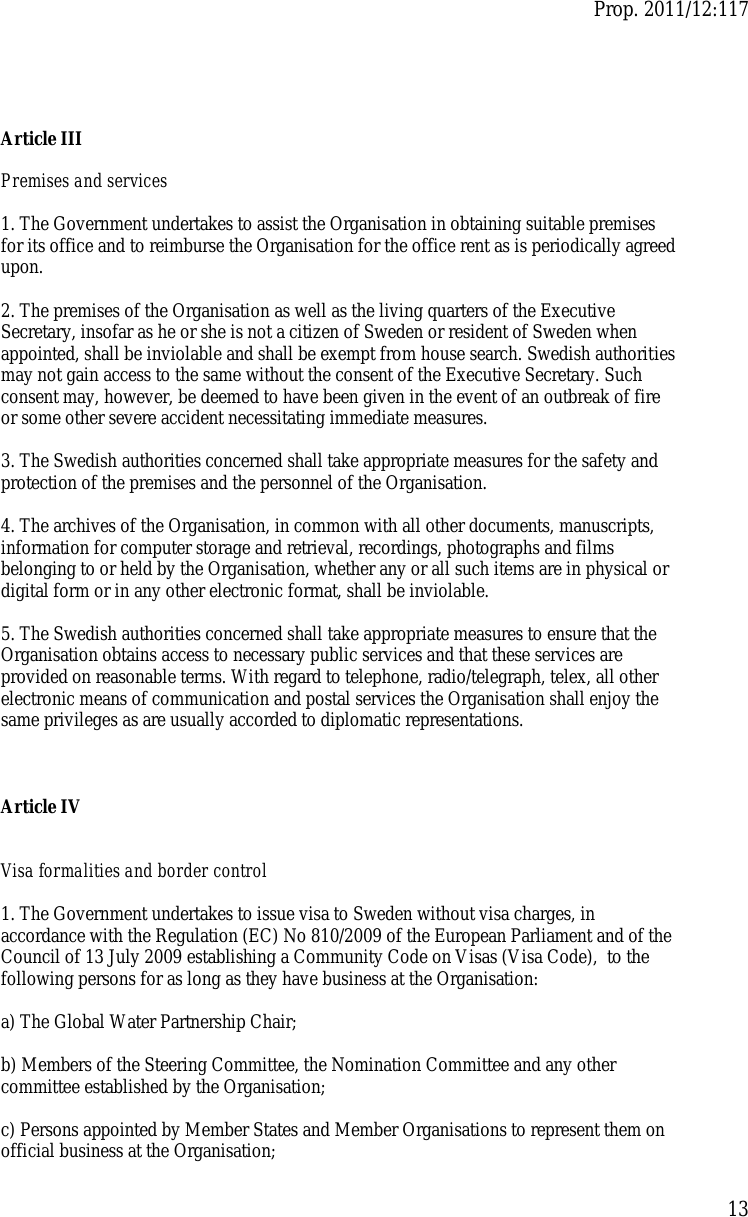 2. The premises of the Organisation as well as the living quarters of the Executive Secretary, insofar as he or she is not a citizen of Sweden or resident of Sweden when appointed, shall be inviolable and shall be exempt from house search. Swedish authorities may not gain access to the same without the consent of the Executive Secretary. Such consent may, however, be deemed to have been given in the event of an outbreak of fire or some other severe accident necessitating immediate measures.

3. The Swedish authorities concerned shall take appropriate measures for the safety and protection of the premises and the personnel of the Organisation.

4. The archives of the Organisation, in common with all other documents, manuscripts, information for computer storage and retrieval, recordings, photographs and films belonging to or held by the Organisation, whether any or all such items are in physical or digital form or in any other electronic format, shall be inviolable.

5. The Swedish authorities concerned shall take appropriate measures to ensure that the Organisation obtains access to necessary public services and that these services are provided on reasonable terms. With regard to telephone, radio/telegraph, telex, all other electronic means of communication and postal services the Organisation shall enjoy the same privileges as are usually accorded to diplomatic representations.

1. The Government undertakes to issue visa to Sweden without visa charges, in accordance with the Regulation (EC) No 810/2009 of the European Parliament and of the Council of 13 July 2009 establishing a Community Code on Visas (Visa Code), to the following persons for as long as they have business at the Organisation:

a) The Global Water Partnership Chair;

b) Members of the Steering Committee, the Nomination Committee and any other committee established by the Organisation;

c) Persons appointed by Member States and Member Organisations to represent them on official business at the Organisation; 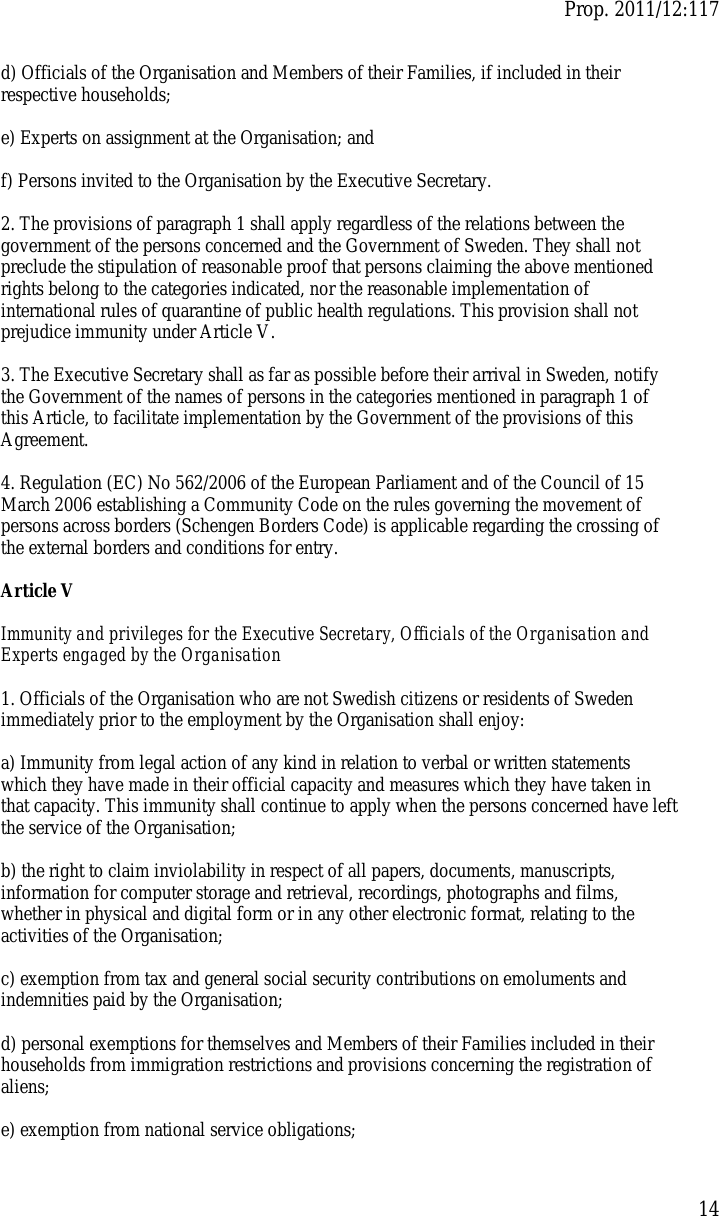 d) Officials of the Organisation and Members of their Families, if included in their respective households;

e) Experts on assignment at the Organisation; and

f) Persons invited to the Organisation by the Executive Secretary.

2. The provisions of paragraph 1 shall apply regardless of the relations between the government of the persons concerned and the Government of Sweden. They shall not preclude the stipulation of reasonable proof that persons claiming the above mentioned rights belong to the categories indicated, nor the reasonable implementation of international rules of quarantine of public health regulations. This provision shall not prejudice immunity under Article V.

4. Regulation (EC) No 562/2006 of the European Parliament and of the Council of 15 March 2006 establishing a Community Code on the rules governing the movement of persons across borders (Schengen Borders Code) is applicable regarding the crossing of the external borders and conditions for entry.

a) Immunity from legal action of any kind in relation to verbal or written statements which they have made in their official capacity and measures which they have taken in that capacity. This immunity shall continue to apply when the persons concerned have left the service of the Organisation;

b) the right to claim inviolability in respect of all papers, documents, manuscripts, information for computer storage and retrieval, recordings, photographs and films, whether in physical and digital form or in any other electronic format, relating to the activities of the Organisation;

c) exemption from tax and general social security contributions on emoluments and indemnities paid by the Organisation;

d) personal exemptions for themselves and Members of their Families included in their households from immigration restrictions and provisions concerning the registration of aliens; 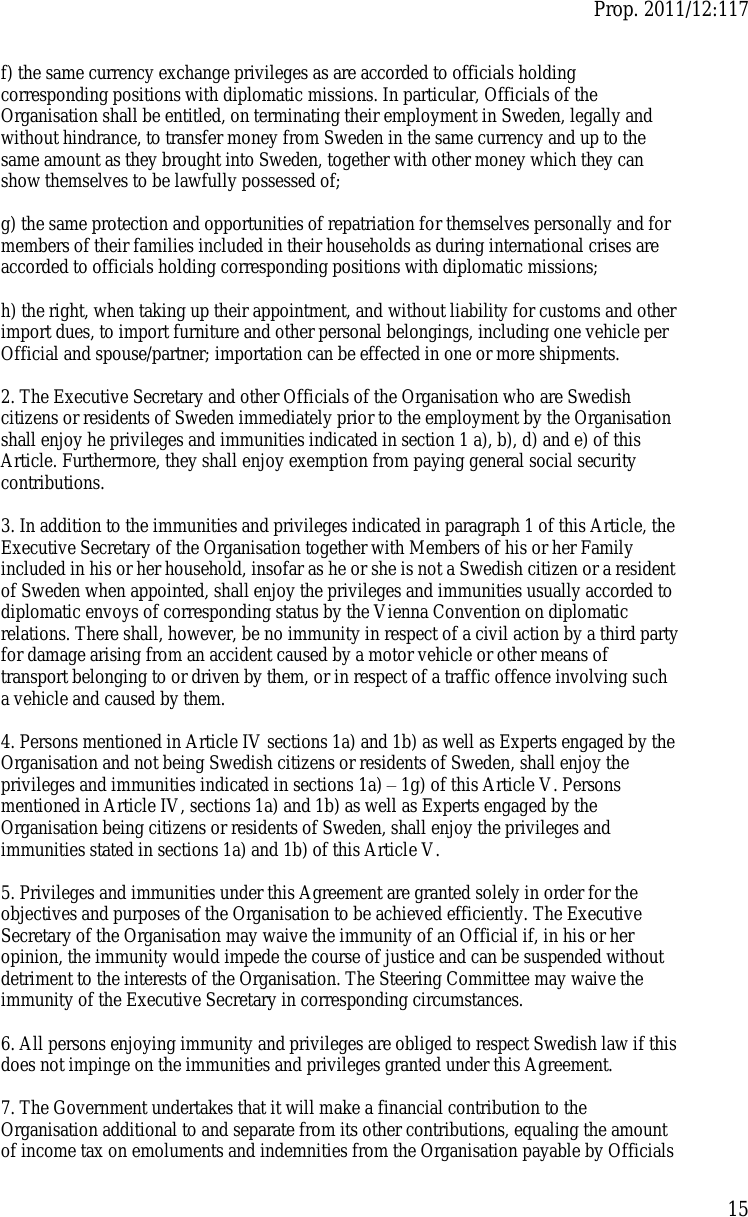 f) the same currency exchange privileges as are accorded to officials holding corresponding positions with diplomatic missions. In particular, Officials of the Organisation shall be entitled, on terminating their employment in Sweden, legally and without hindrance, to transfer money from Sweden in the same currency and up to the same amount as they brought into Sweden, together with other money which they can show themselves to be lawfully possessed of;

g) the same protection and opportunities of repatriation for themselves personally and for members of their families included in their households as during international crises are accorded to officials holding corresponding positions with diplomatic missions;

h) the right, when taking up their appointment, and without liability for customs and other import dues, to import furniture and other personal belongings, including one vehicle per Official and spouse/partner; importation can be effected in one or more shipments.

2. The Executive Secretary and other Officials of the Organisation who are Swedish citizens or residents of Sweden immediately prior to the employment by the Organisation shall enjoy he privileges and immunities indicated in section 1 a), b), d) and e) of this Article. Furthermore, they shall enjoy exemption from paying general social security contributions.

3. In addition to the immunities and privileges indicated in paragraph 1 of this Article, the Executive Secretary of the Organisation together with Members of his or her Family included in his or her household, insofar as he or she is not a Swedish citizen or a resident of Sweden when appointed, shall enjoy the privileges and immunities usually accorded to diplomatic envoys of corresponding status by the Vienna Convention on diplomatic relations. There shall, however, be no immunity in respect of a civil action by a third party for damage arising from an accident caused by a motor vehicle or other means of transport belonging to or driven by them, or in respect of a traffic offence involving such a vehicle and caused by them.

6. All persons enjoying immunity and privileges are obliged to respect Swedish law if this does not impinge on the immunities and privileges granted under this Agreement. 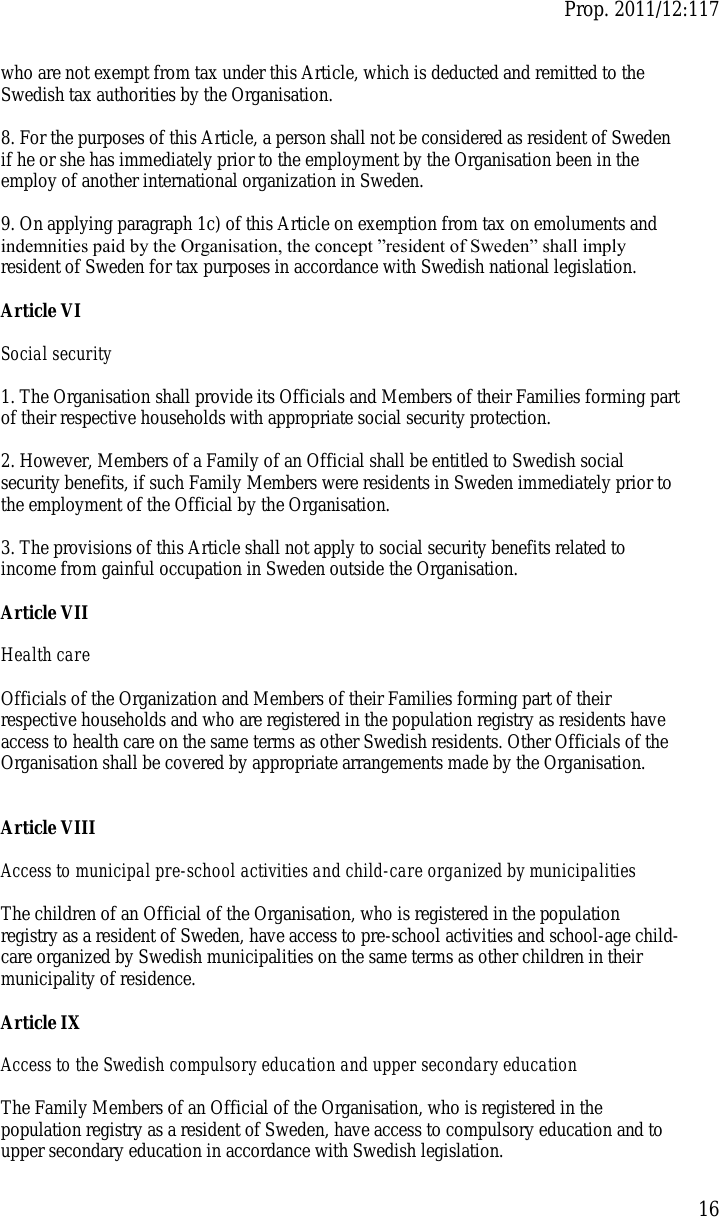 who are not exempt from tax under this Article, which is deducted and remitted to the Swedish tax authorities by the Organisation.

8. For the purposes of this Article, a person shall not be considered as resident of Sweden if he or she has immediately prior to the employment by the Organisation been in the employ of another international organization in Sweden.

9. On applying paragraph 1c) of this Article on exemption from tax on emoluments and indemnities paid by the Organisation, the concept ”resident of Sweden” shall imply resident of Sweden for tax purposes in accordance with Swedish national legislation.

1. The Organisation shall provide its Officials and Members of their Families forming part of their respective households with appropriate social security protection.

2. However, Members of a Family of an Official shall be entitled to Swedish social security benefits, if such Family Members were residents in Sweden immediately prior to the employment of the Official by the Organisation.

3. The provisions of this Article shall not apply to social security benefits related to income from gainful occupation in Sweden outside the Organisation.

The children of an Official of the Organisation, who is registered in the population registry as a resident of Sweden, have access to pre-school activities and school-age childcare organized by Swedish municipalities on the same terms as other children in their municipality of residence.

Access to the Swedish compulsory education and upper secondary education

The Family Members of an Official of the Organisation, who is registered in the population registry as a resident of Sweden, have access to compulsory education and to upper secondary education in accordance with Swedish legislation. 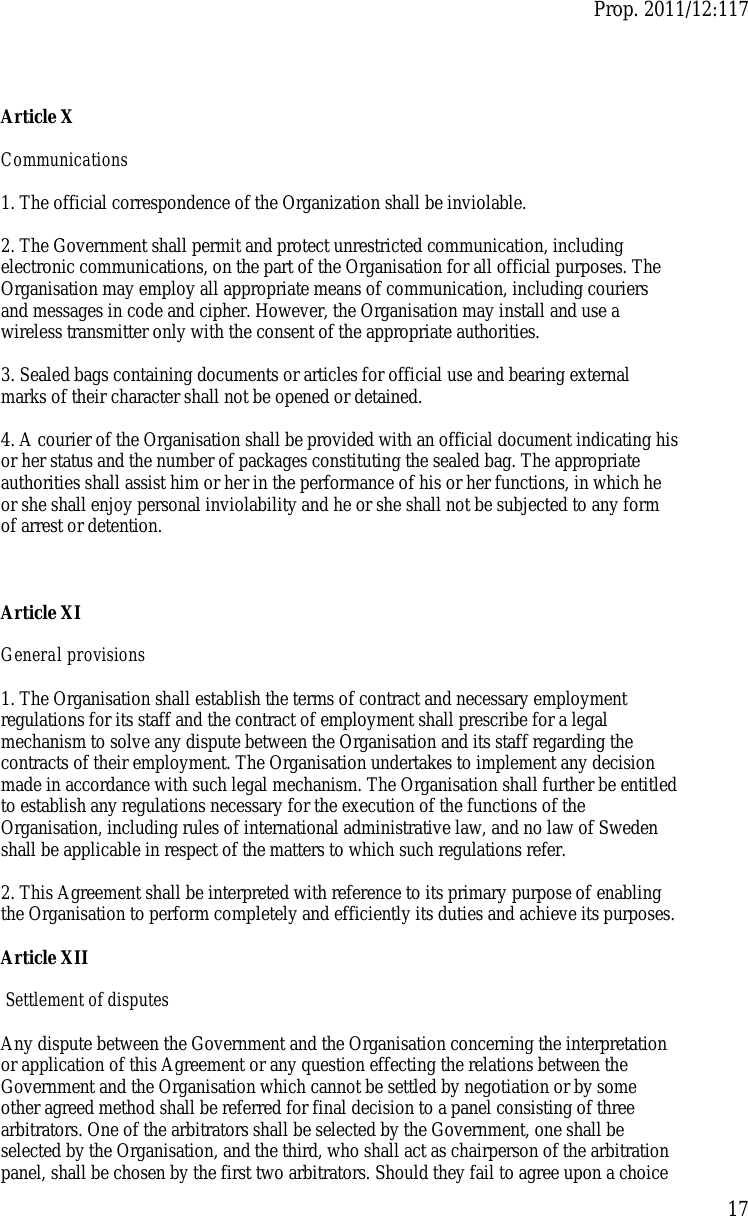 1. The official correspondence of the Organization shall be inviolable.

3. Sealed bags containing documents or articles for official use and bearing external marks of their character shall not be opened or detained.

4. A courier of the Organisation shall be provided with an official document indicating his or her status and the number of packages constituting the sealed bag. The appropriate authorities shall assist him or her in the performance of his or her functions, in which he or she shall enjoy personal inviolability and he or she shall not be subjected to any form of arrest or detention.

2. This Agreement shall be interpreted with reference to its primary purpose of enabling the Organisation to perform completely and efficiently its duties and achieve its purposes. 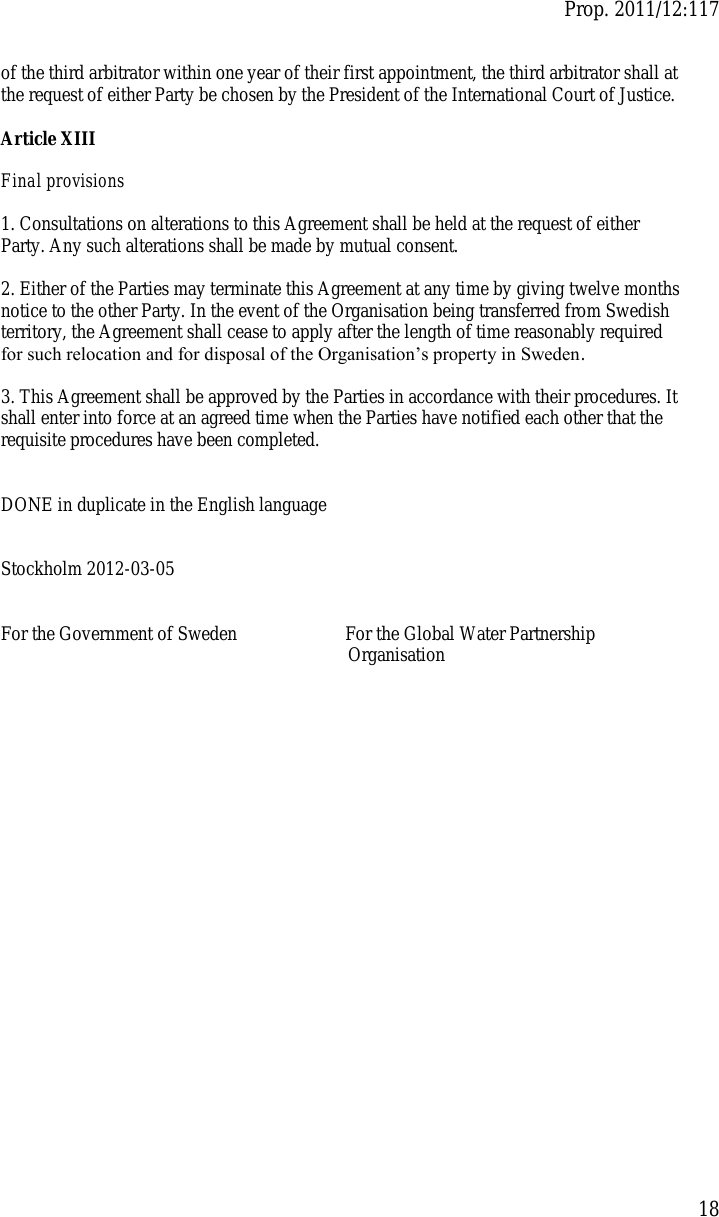 1. Consultations on alterations to this Agreement shall be held at the request of either Party. Any such alterations shall be made by mutual consent.

2. Either of the Parties may terminate this Agreement at any time by giving twelve months notice to the other Party. In the event of the Organisation being transferred from Swedish territory, the Agreement shall cease to apply after the length of time reasonably required for such relocation and for disposal of the Organisation’s property in Sweden.

3. This Agreement shall be approved by the Parties in accordance with their procedures. It shall enter into force at an agreed time when the Parties have notified each other that the requisite procedures have been completed.

DONE in duplicate in the English language

For the Government of Sweden For the Global Water Partnership Organisation 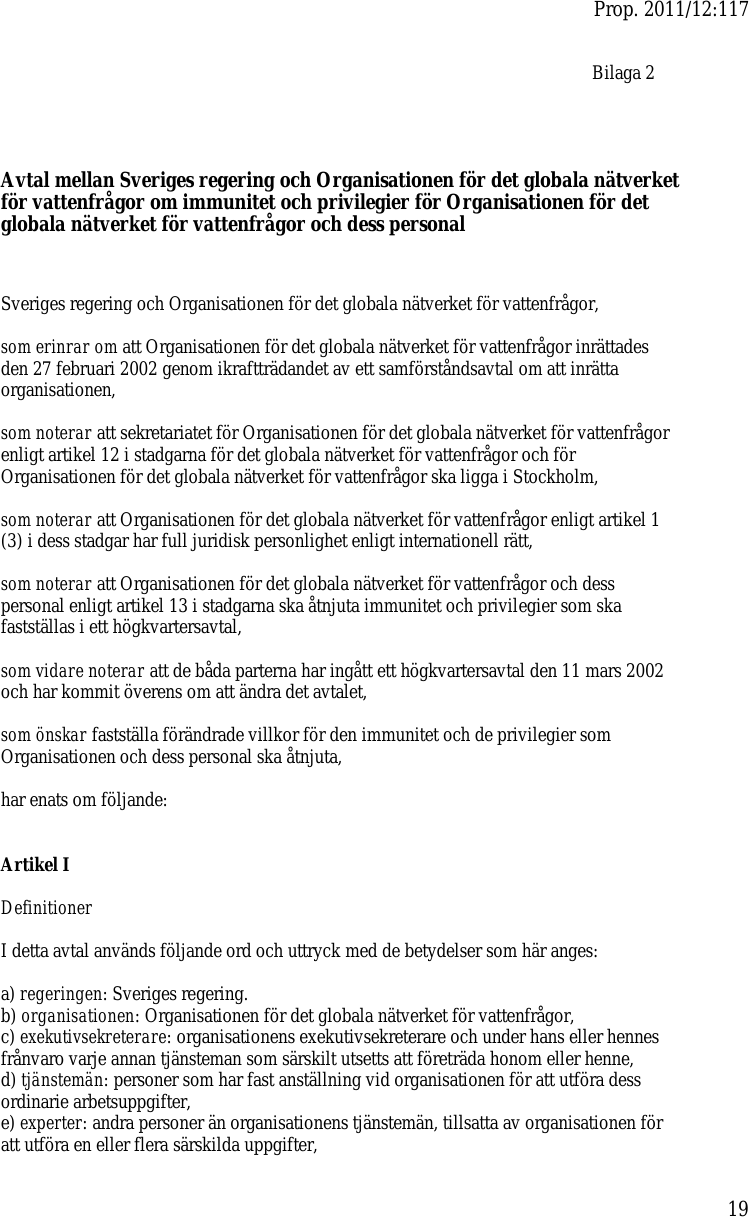 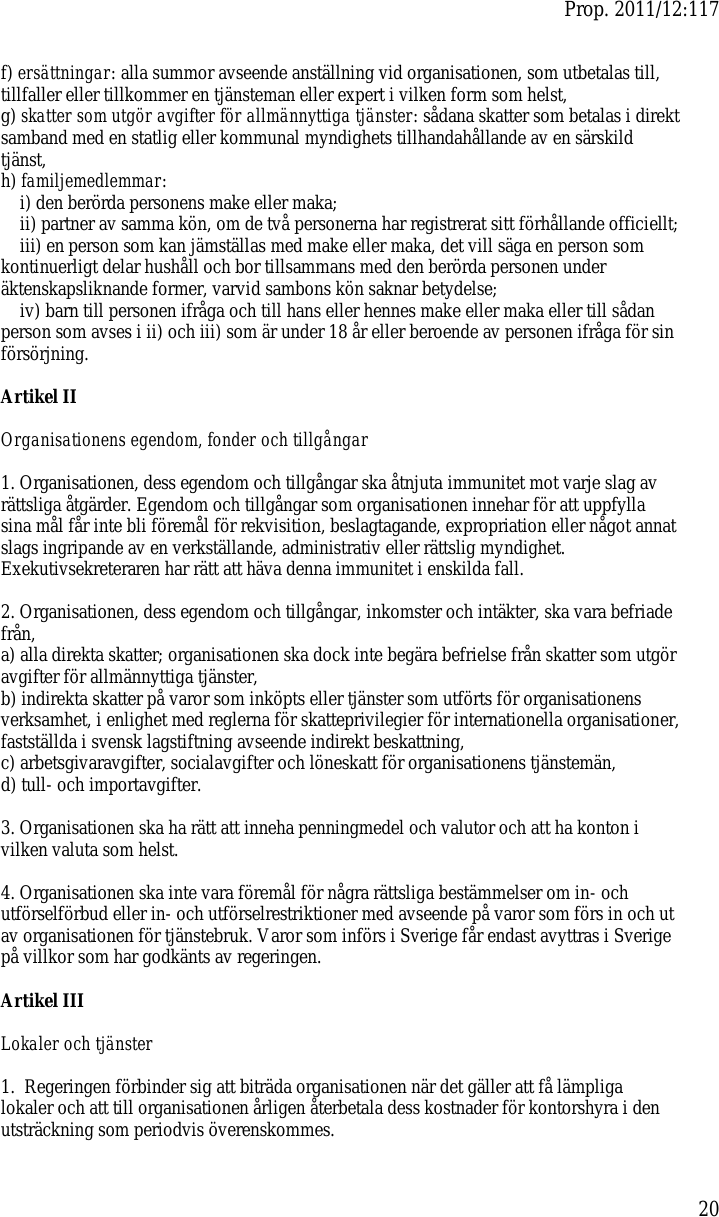 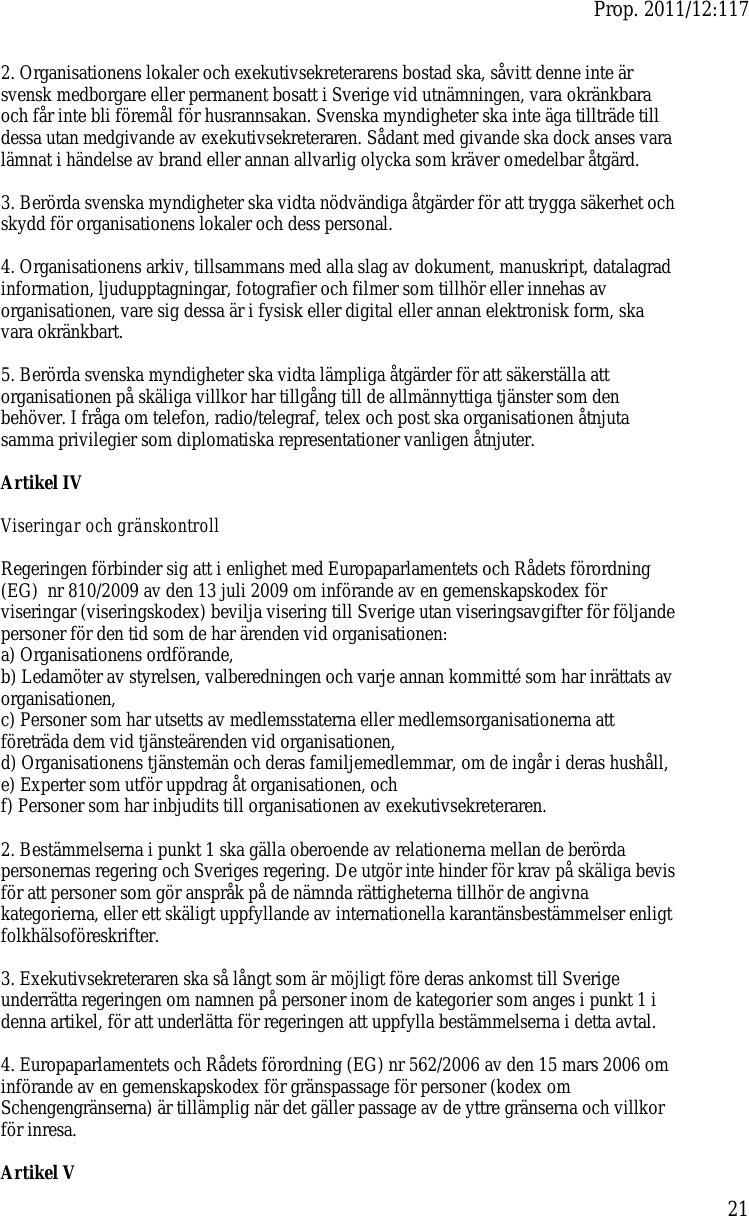 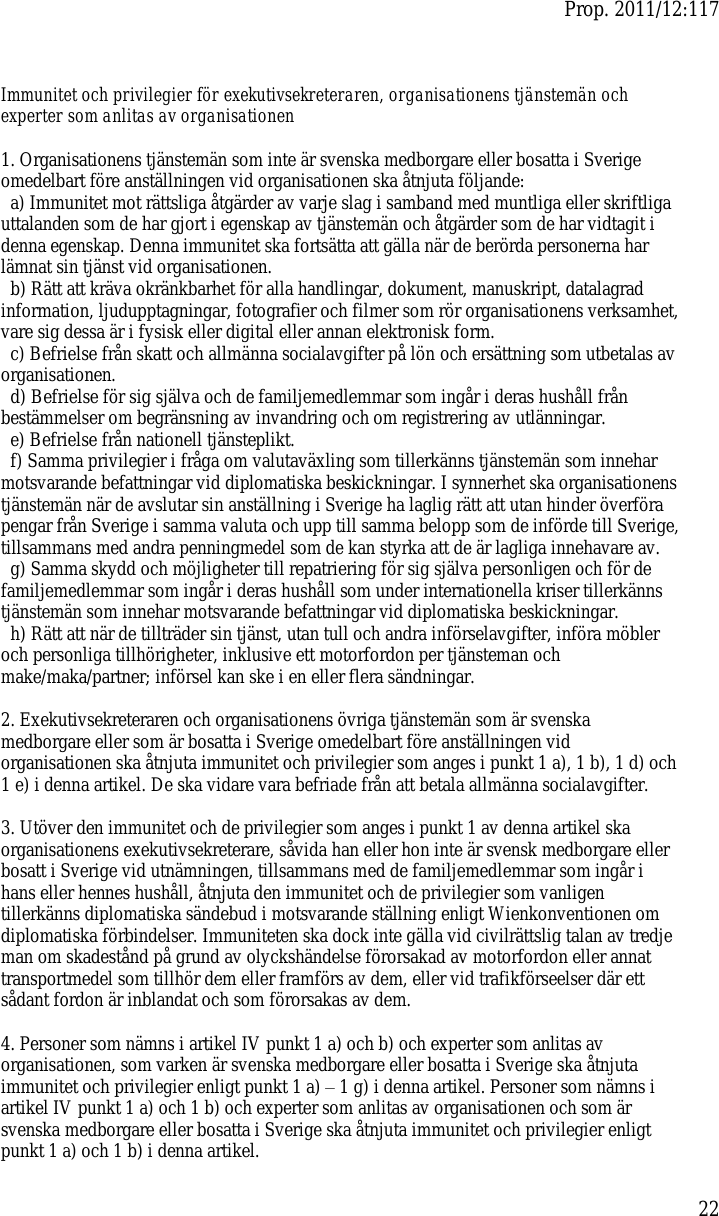 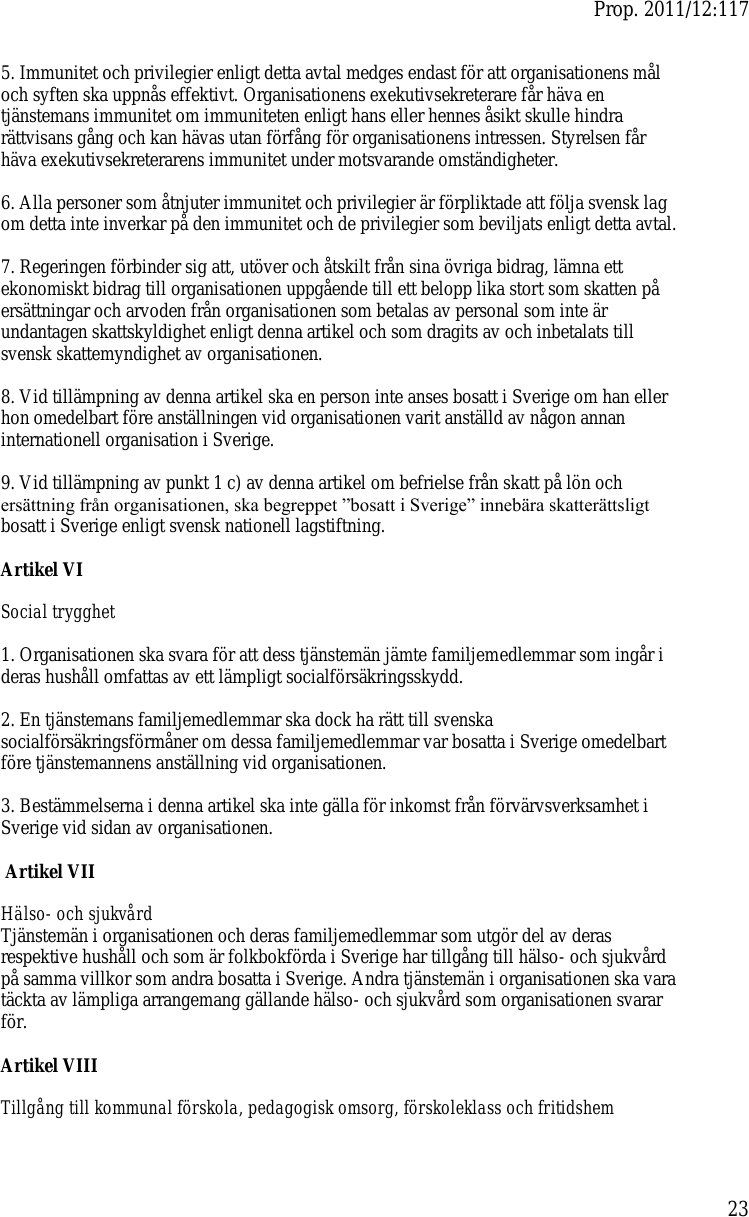 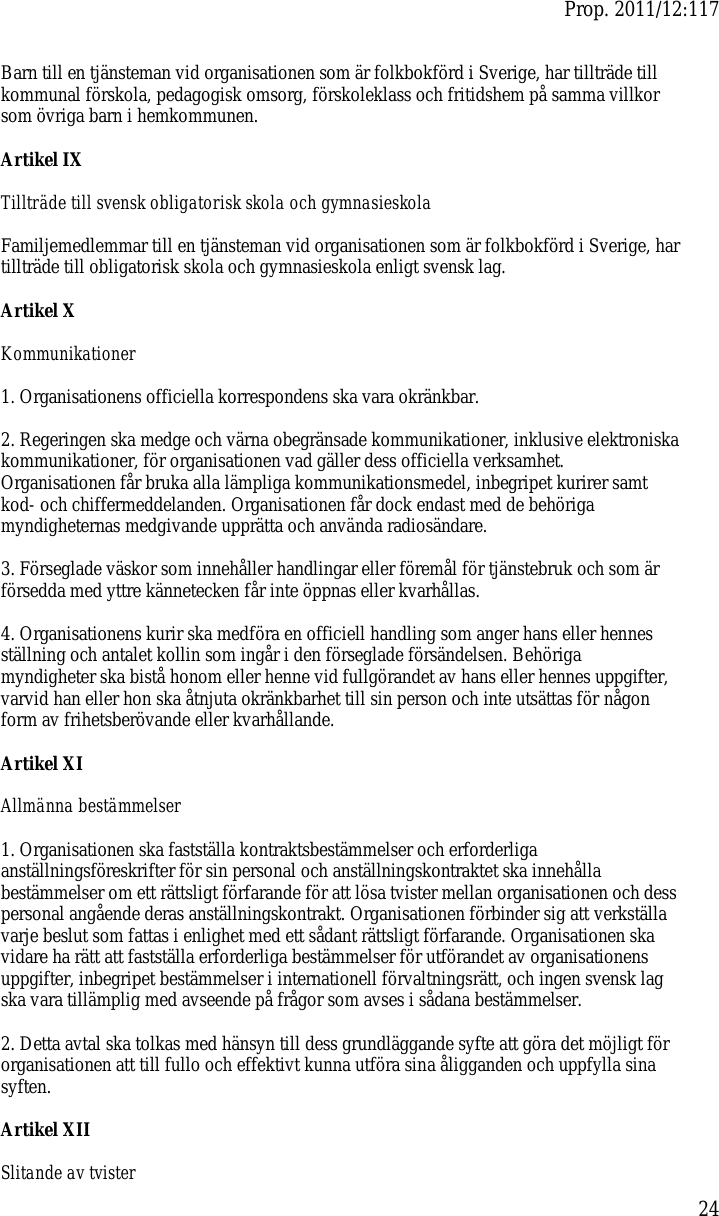 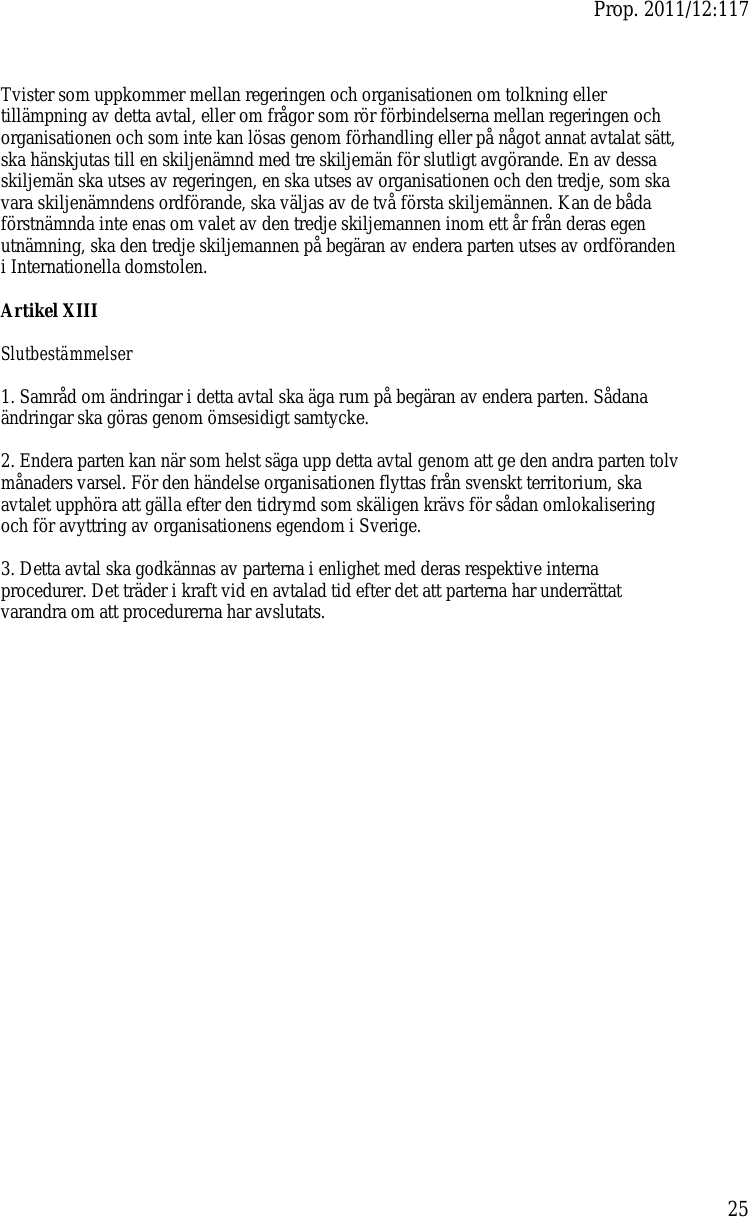 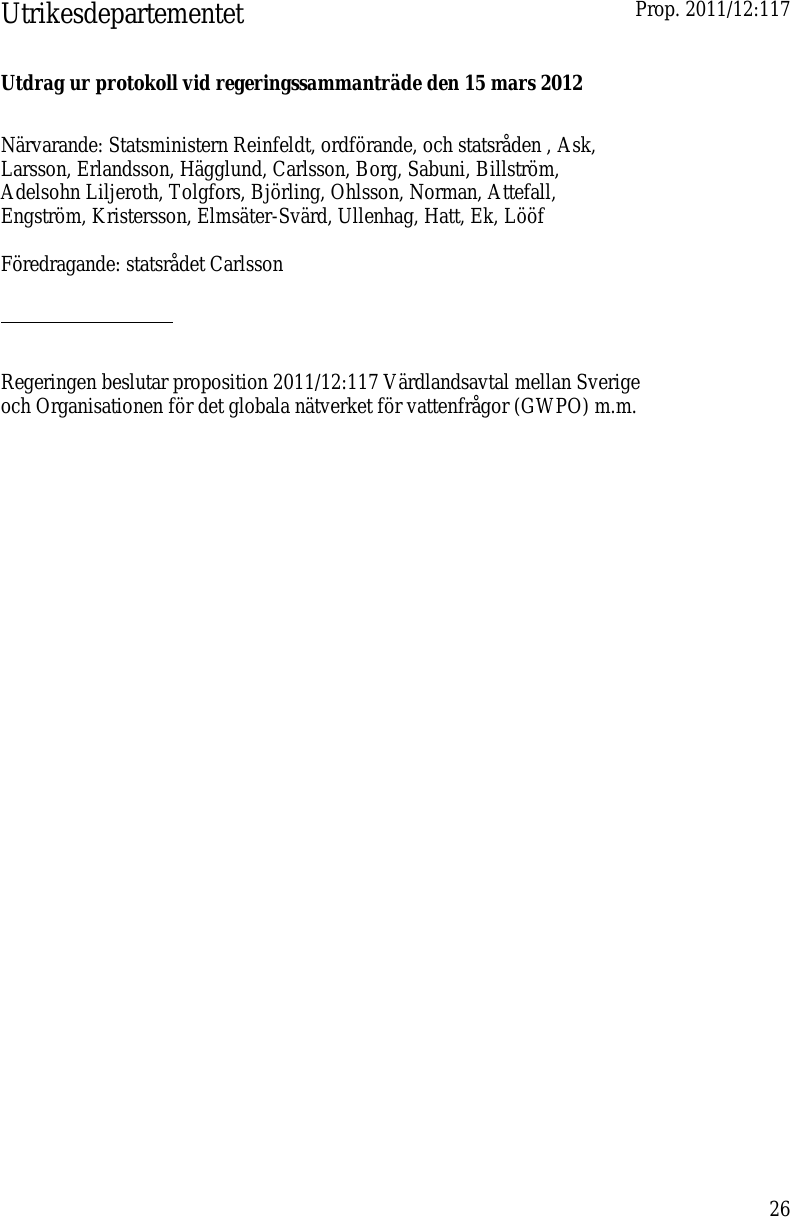