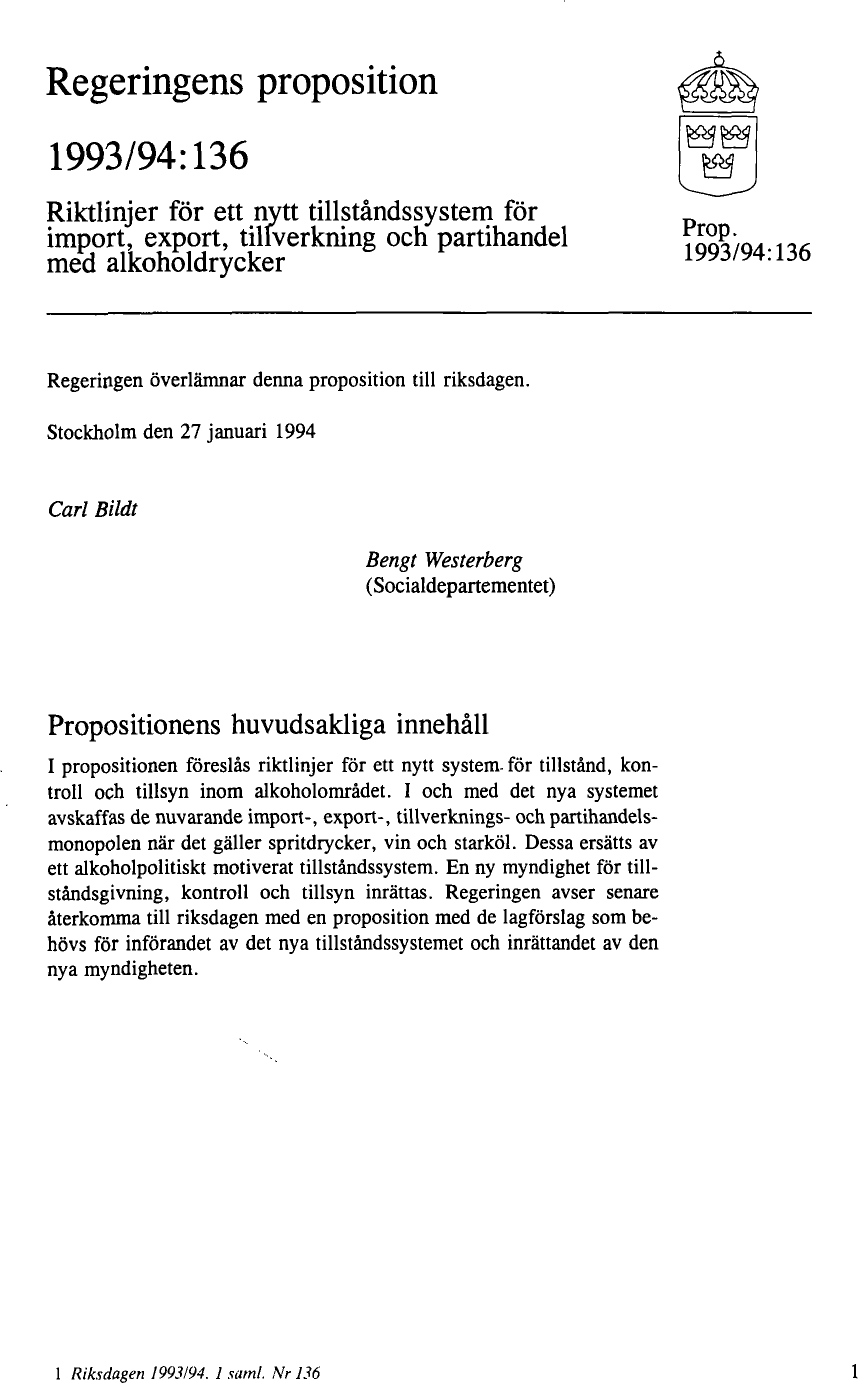 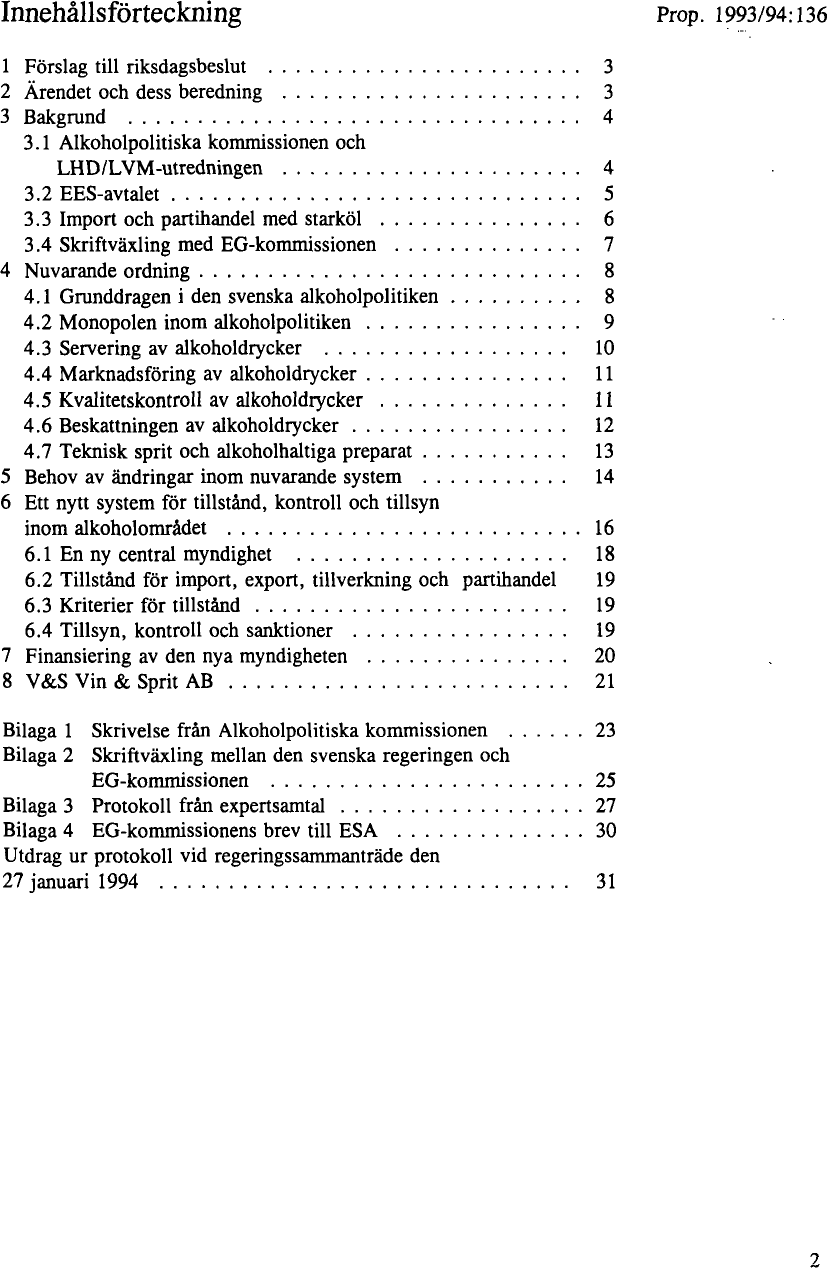 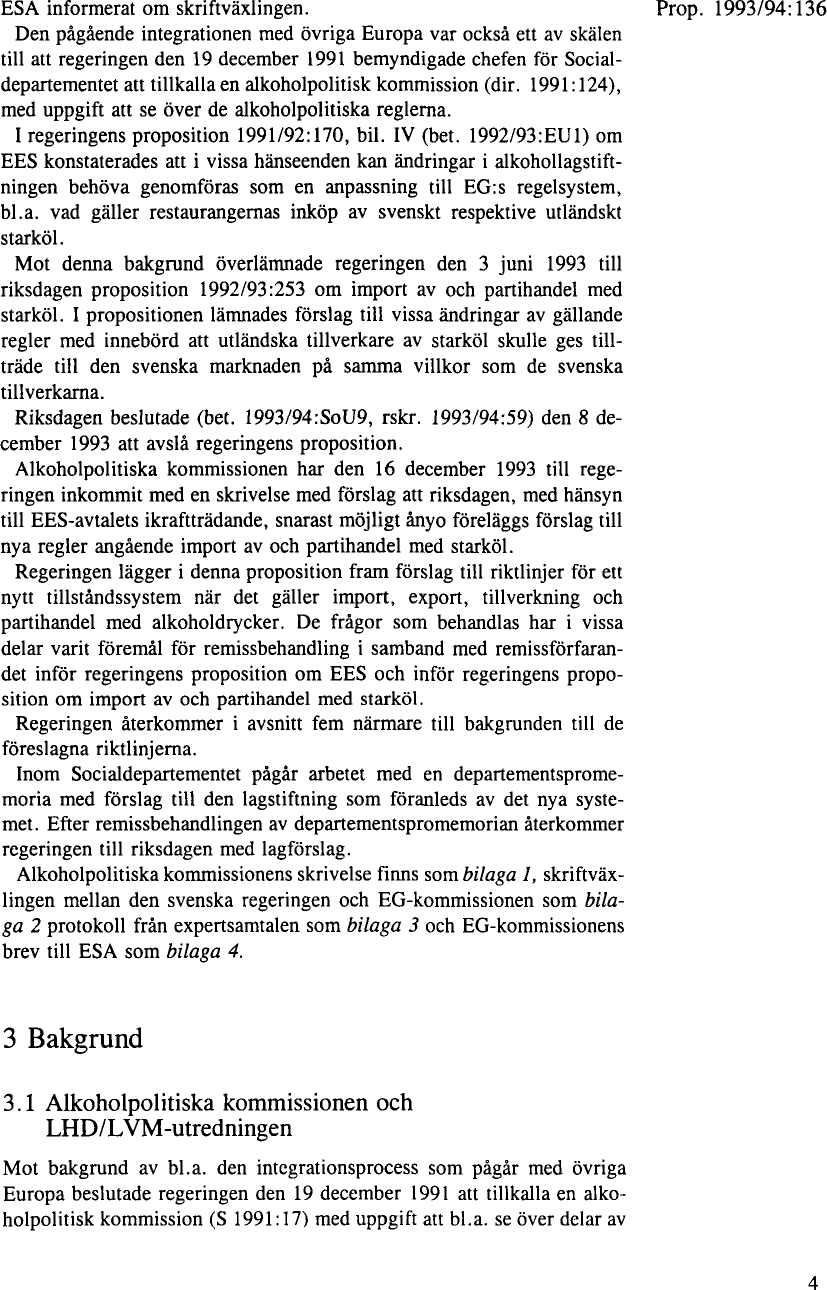 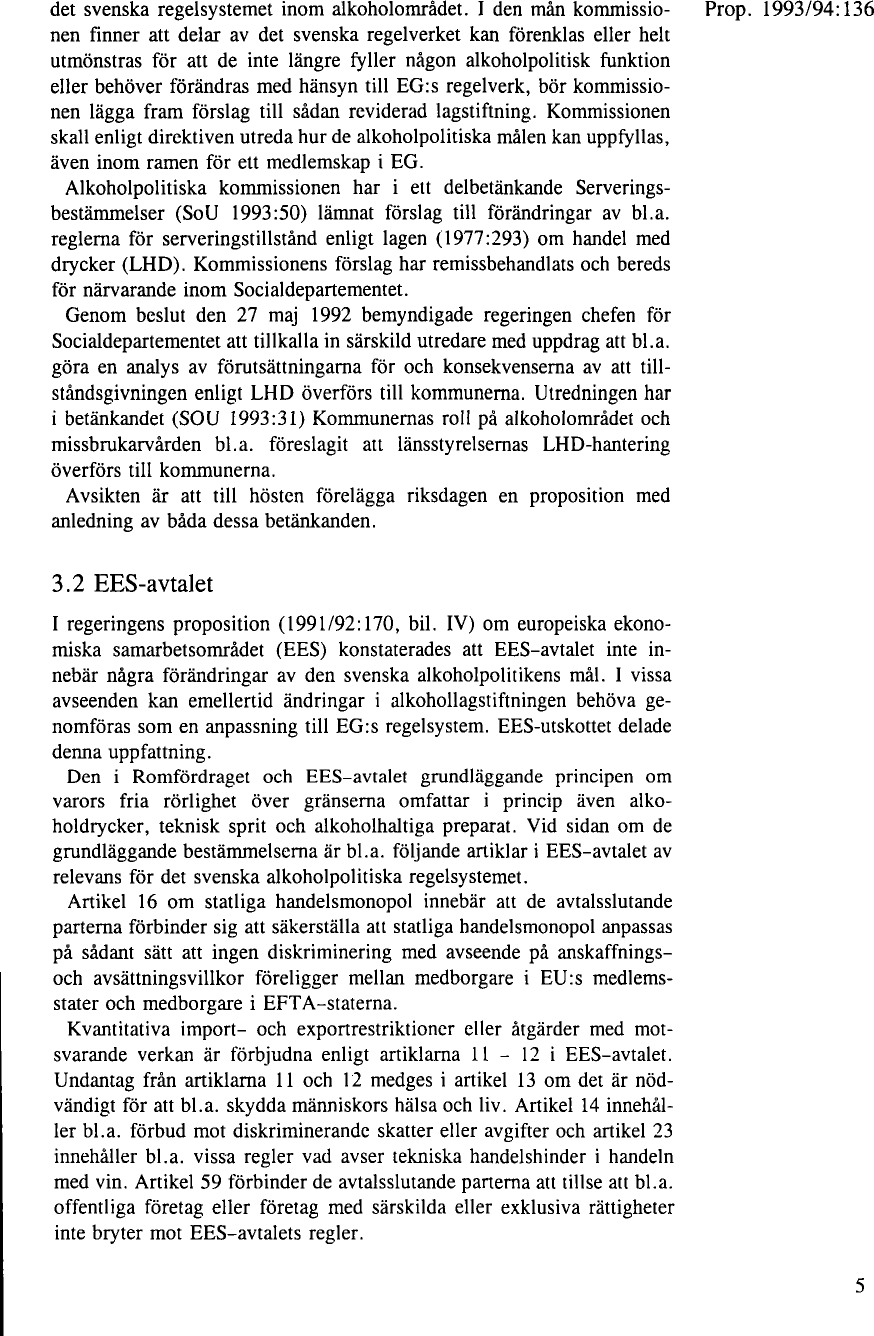 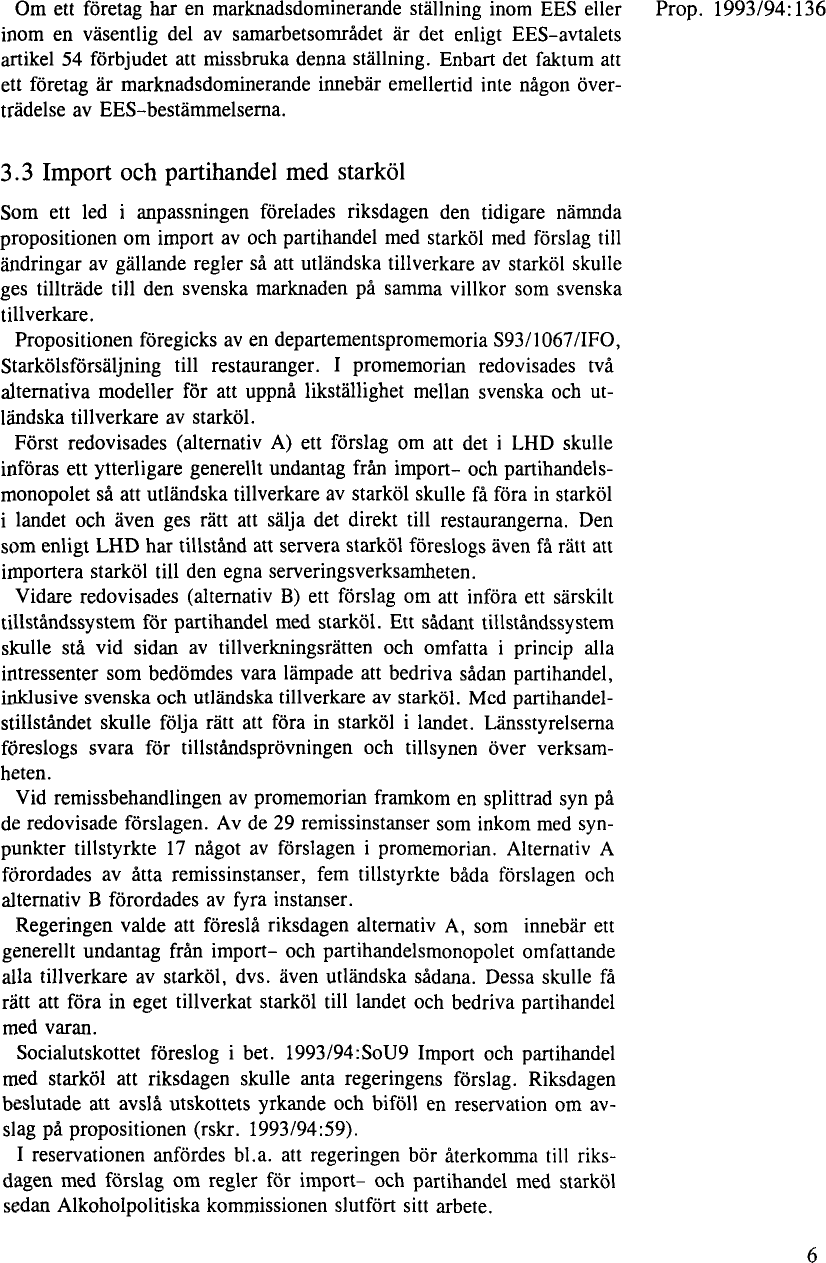 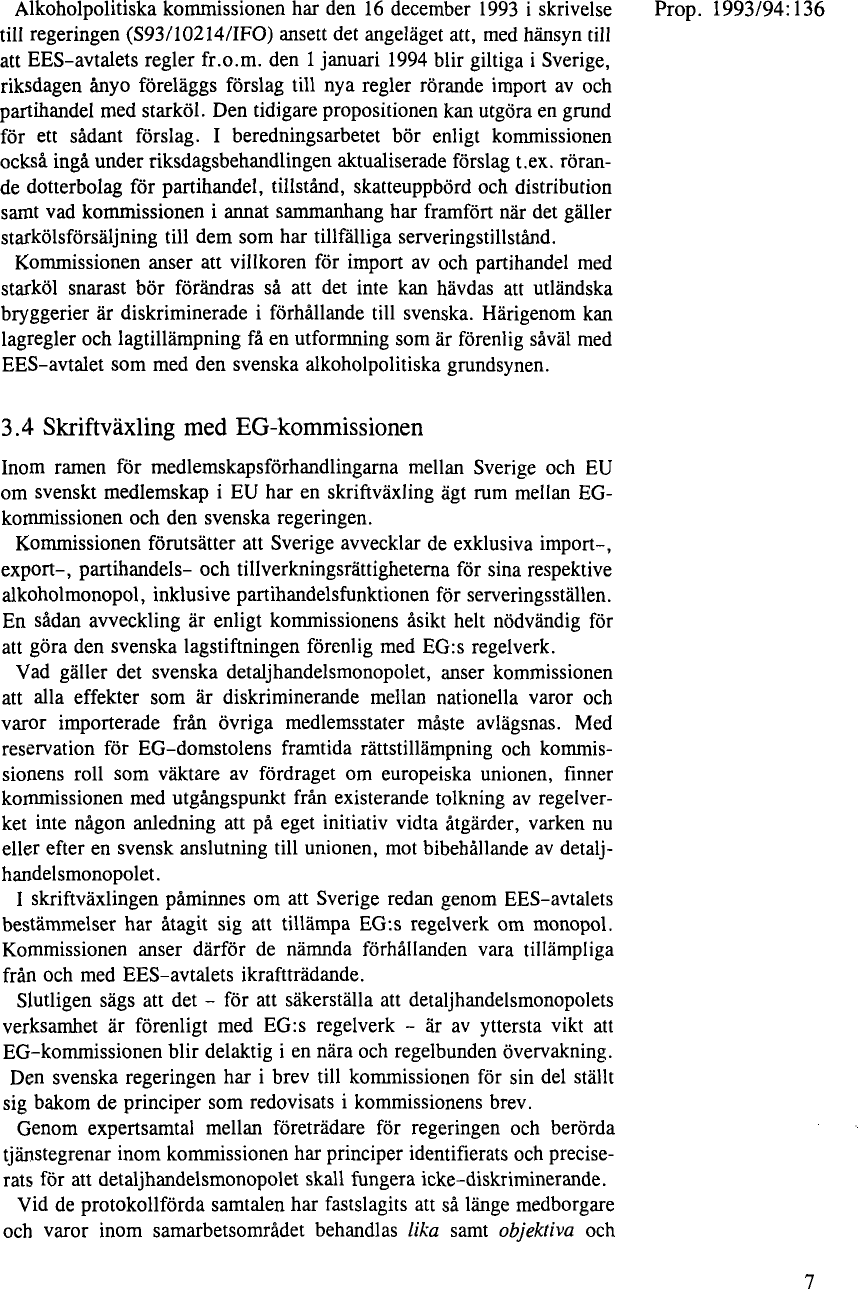 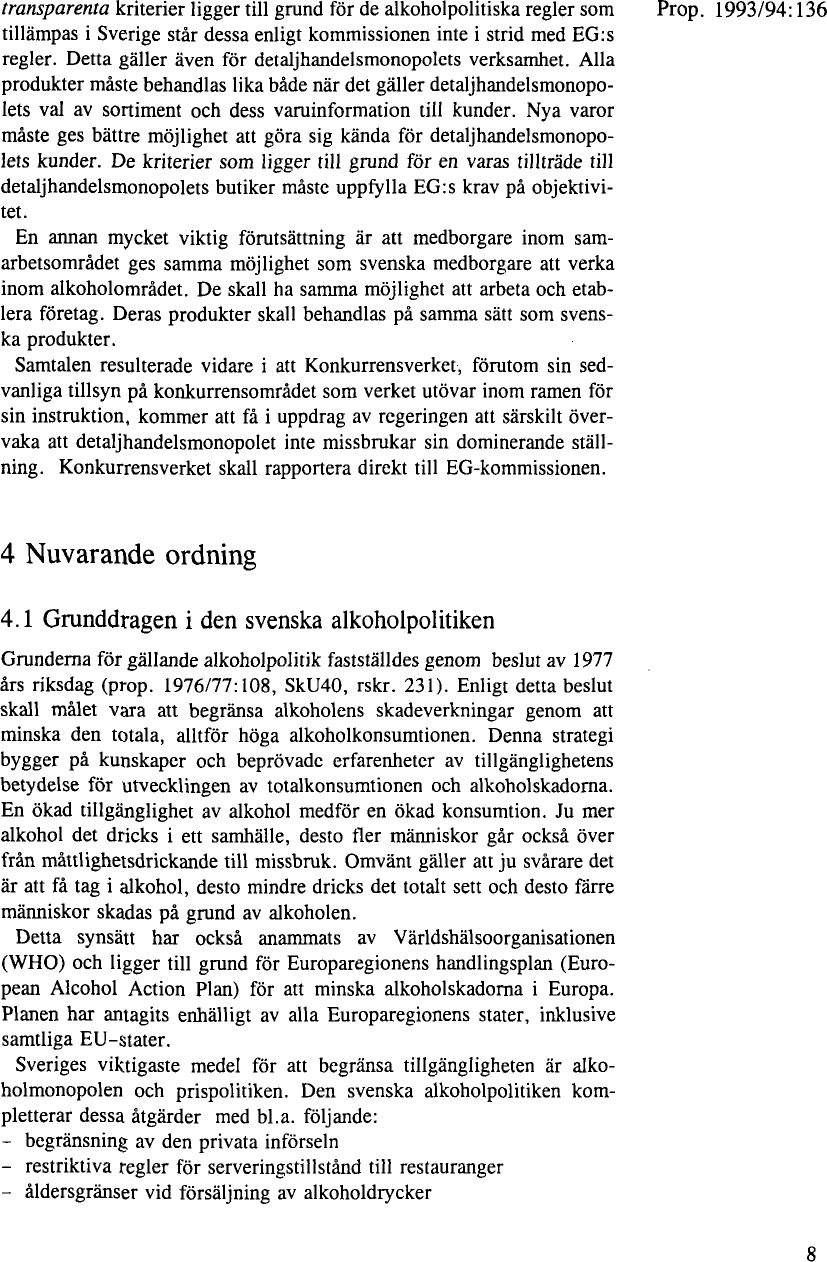 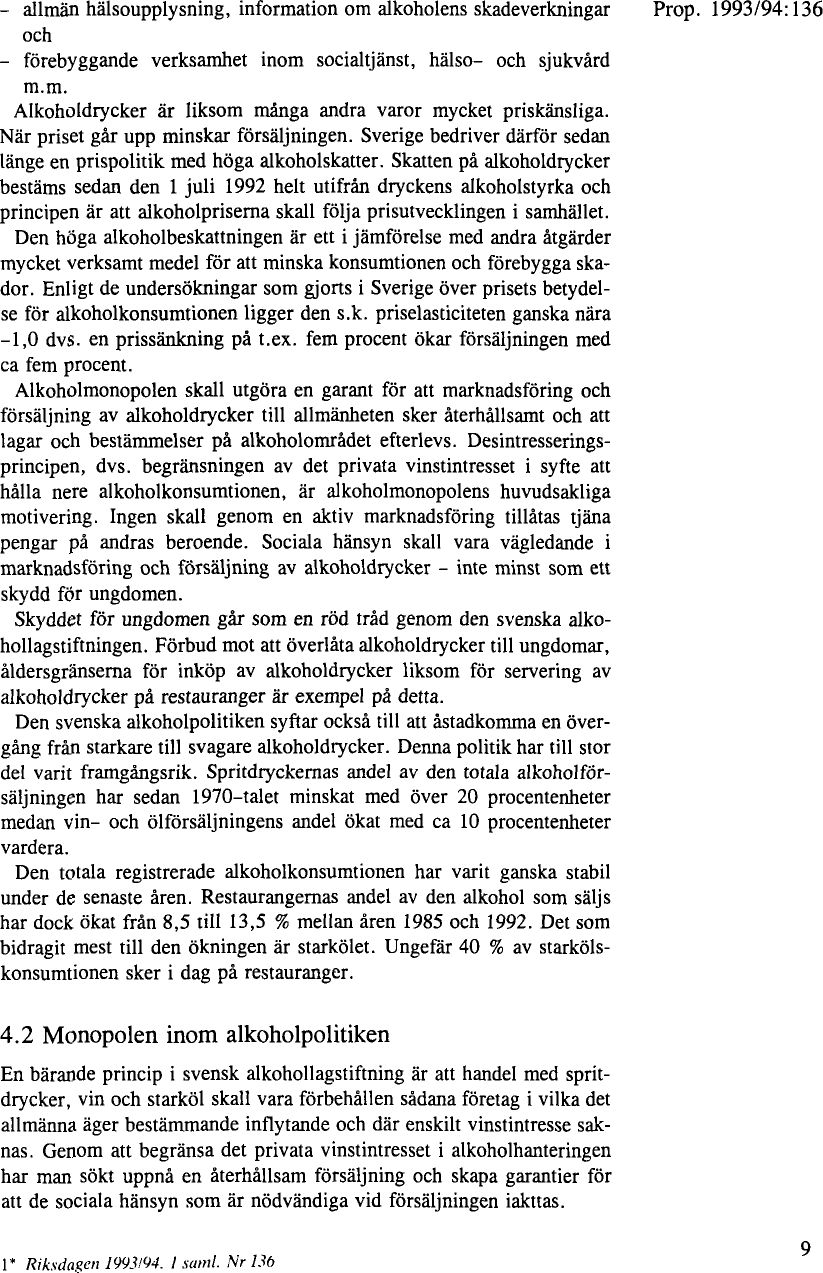 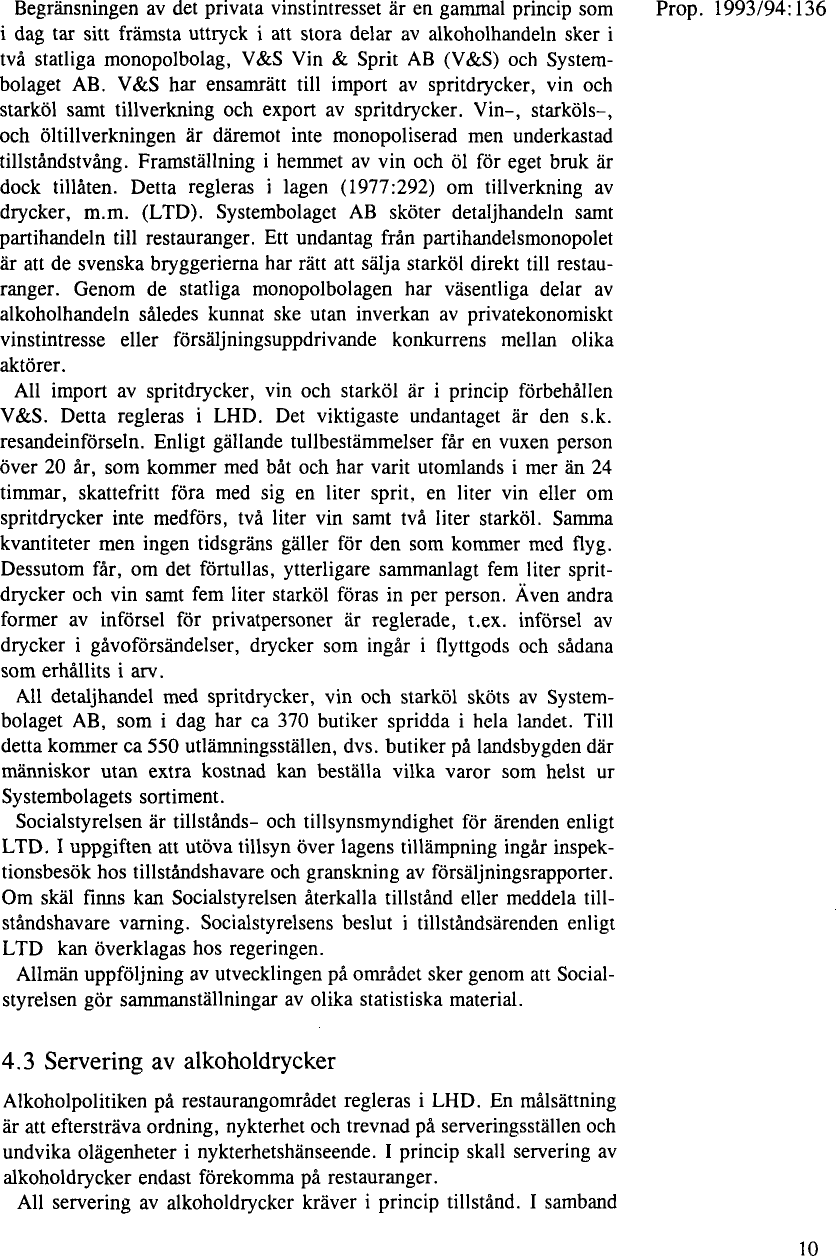 All servering av alkoholdrycker kräver i princip tillstånd. I samband 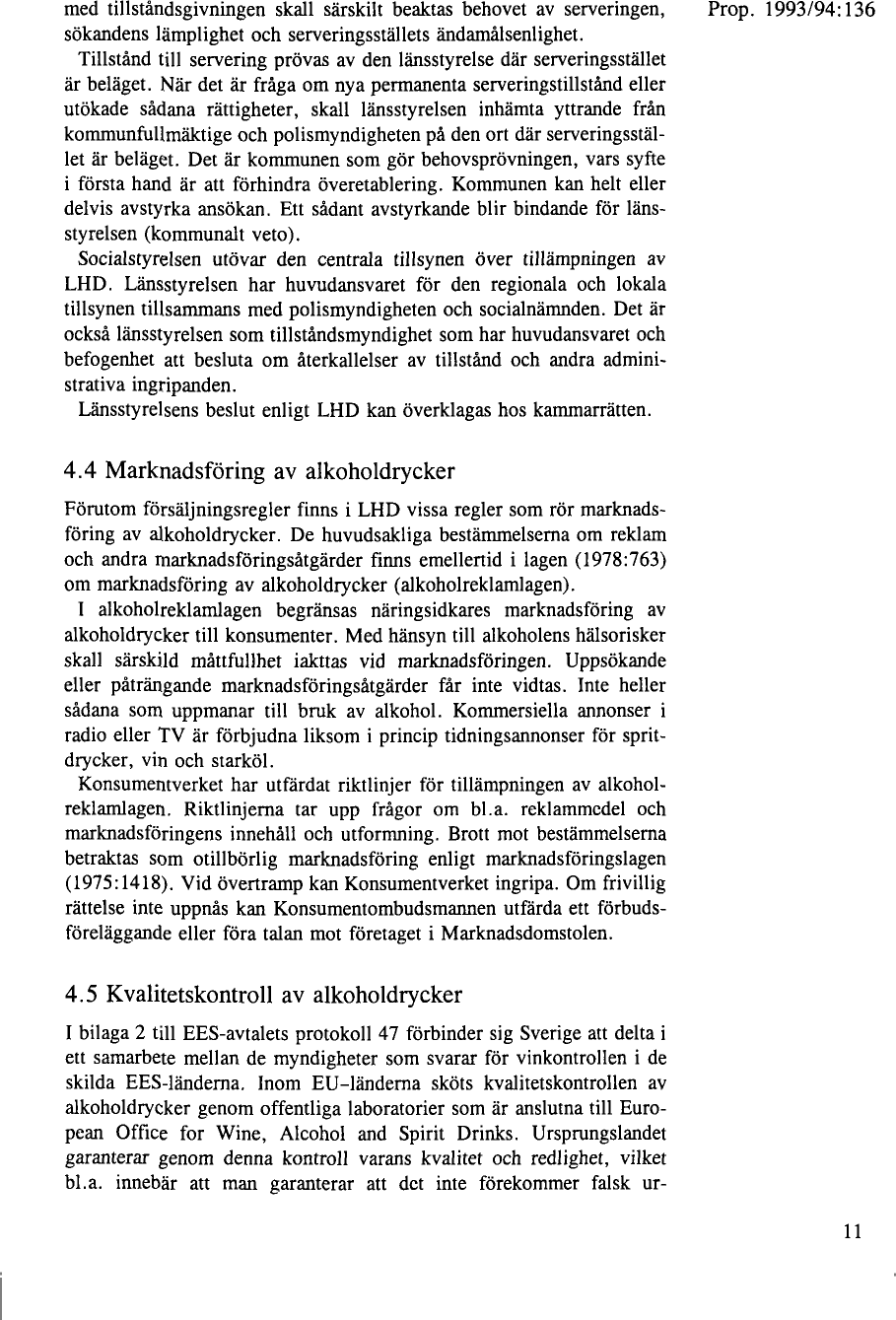 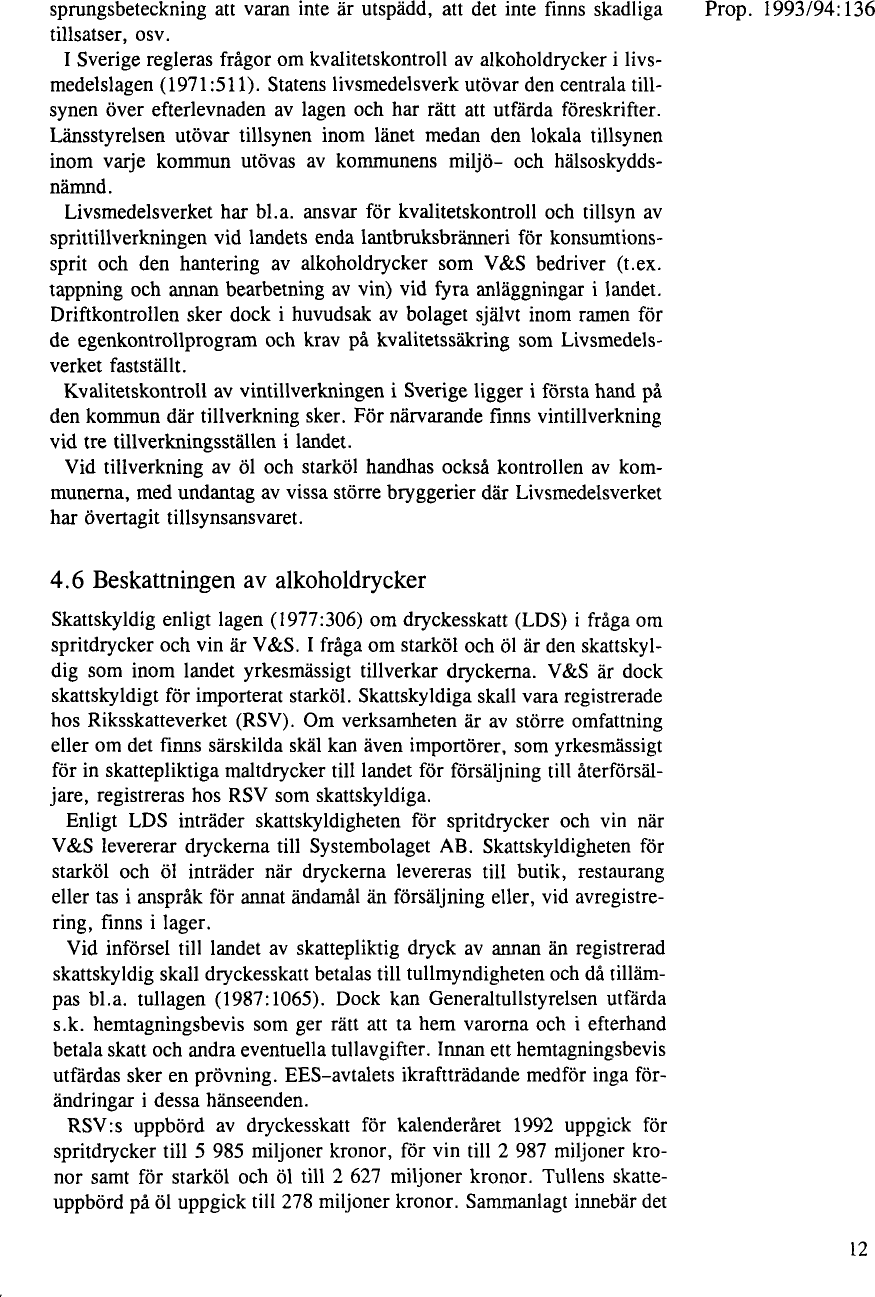 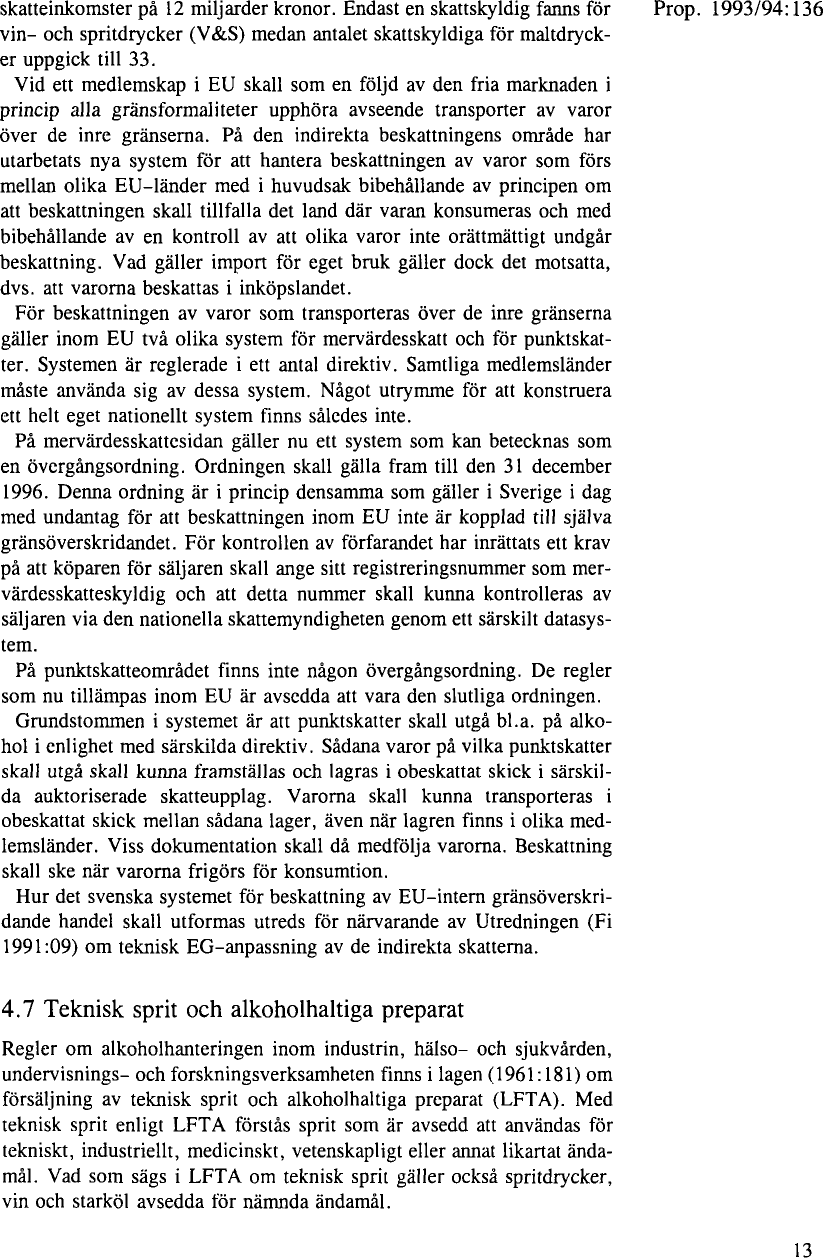 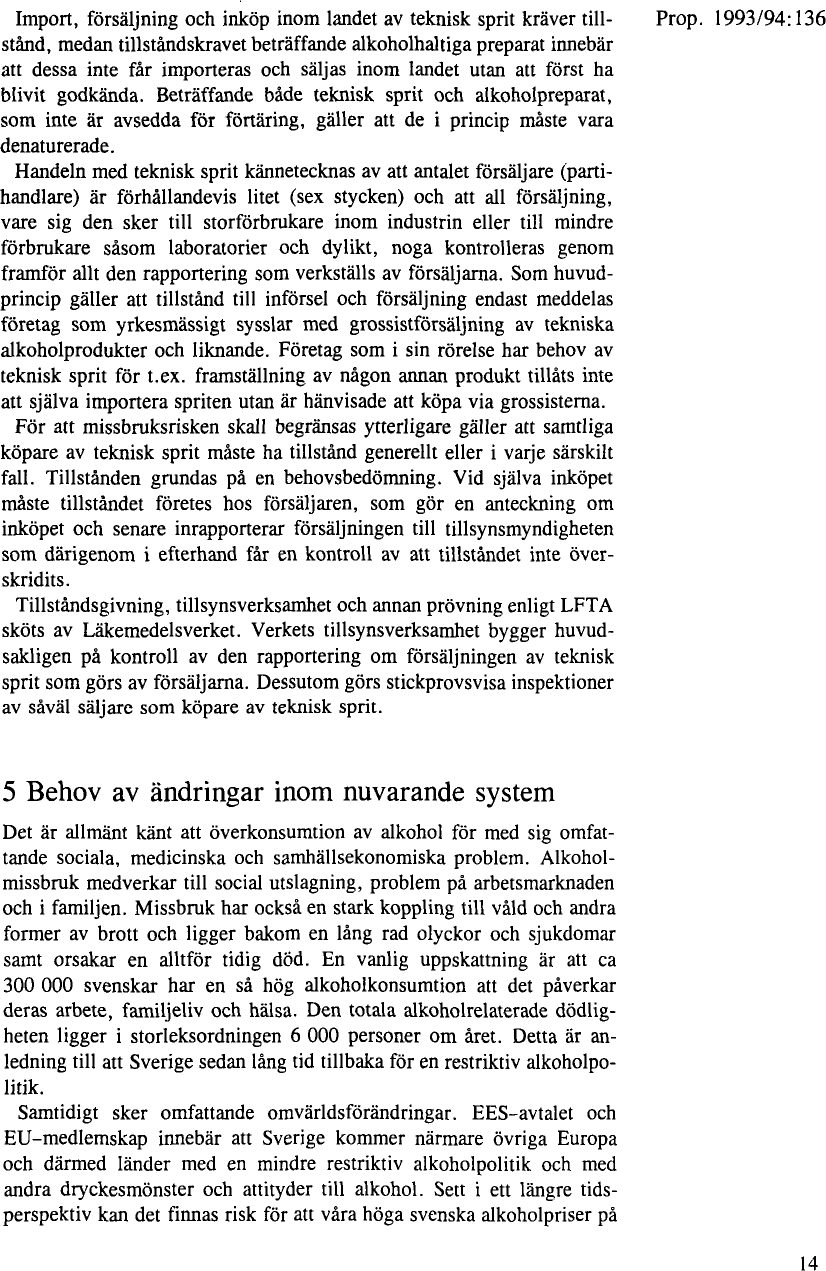 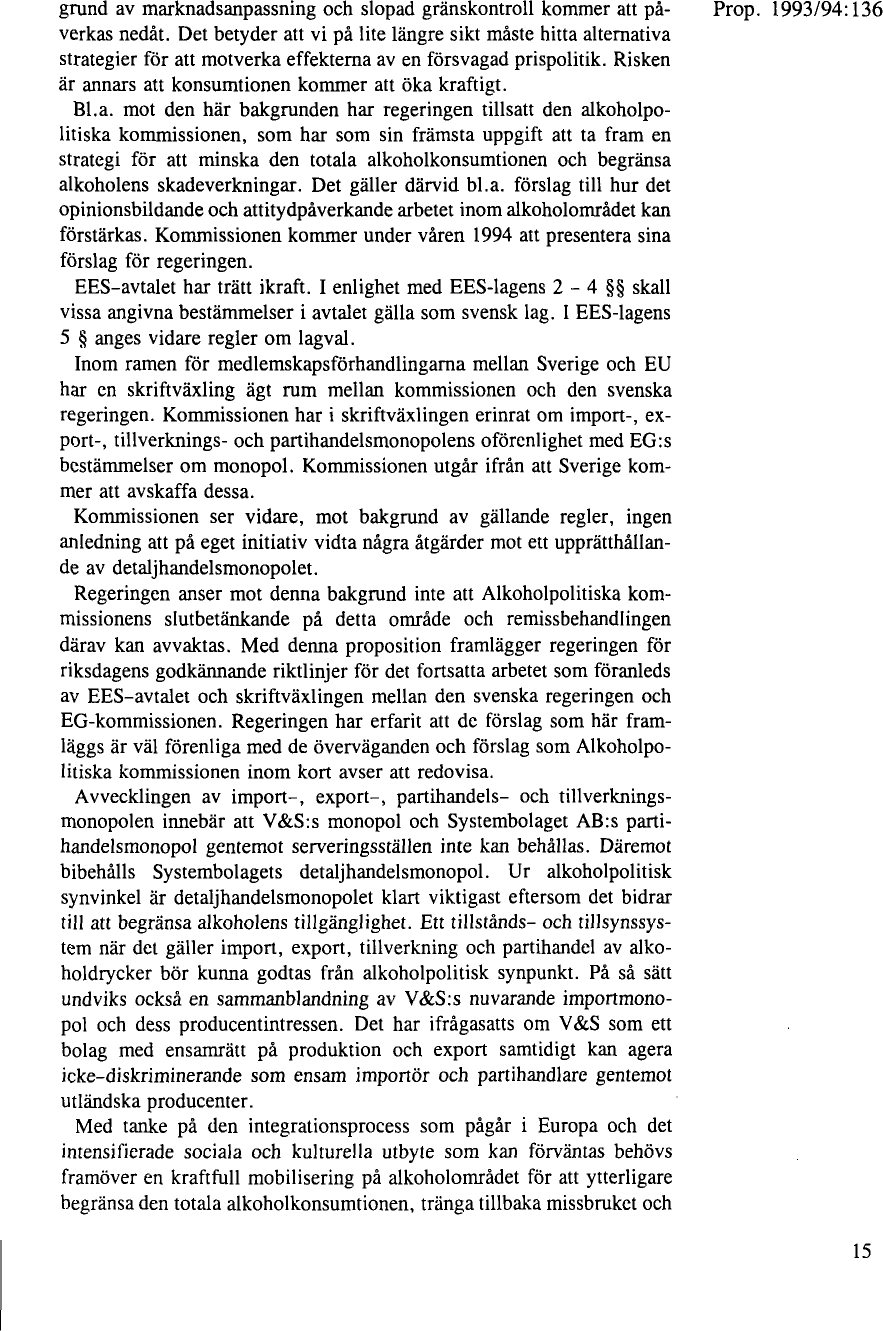 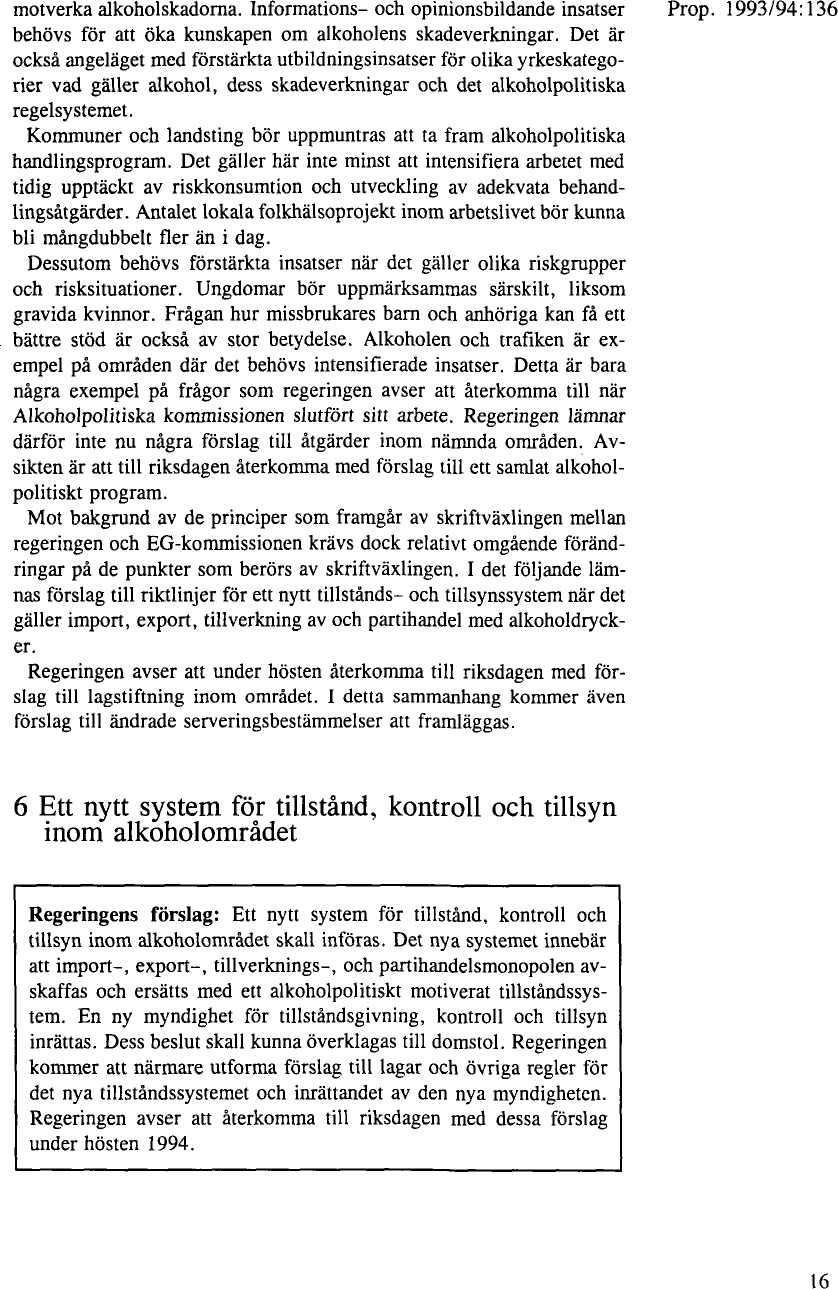 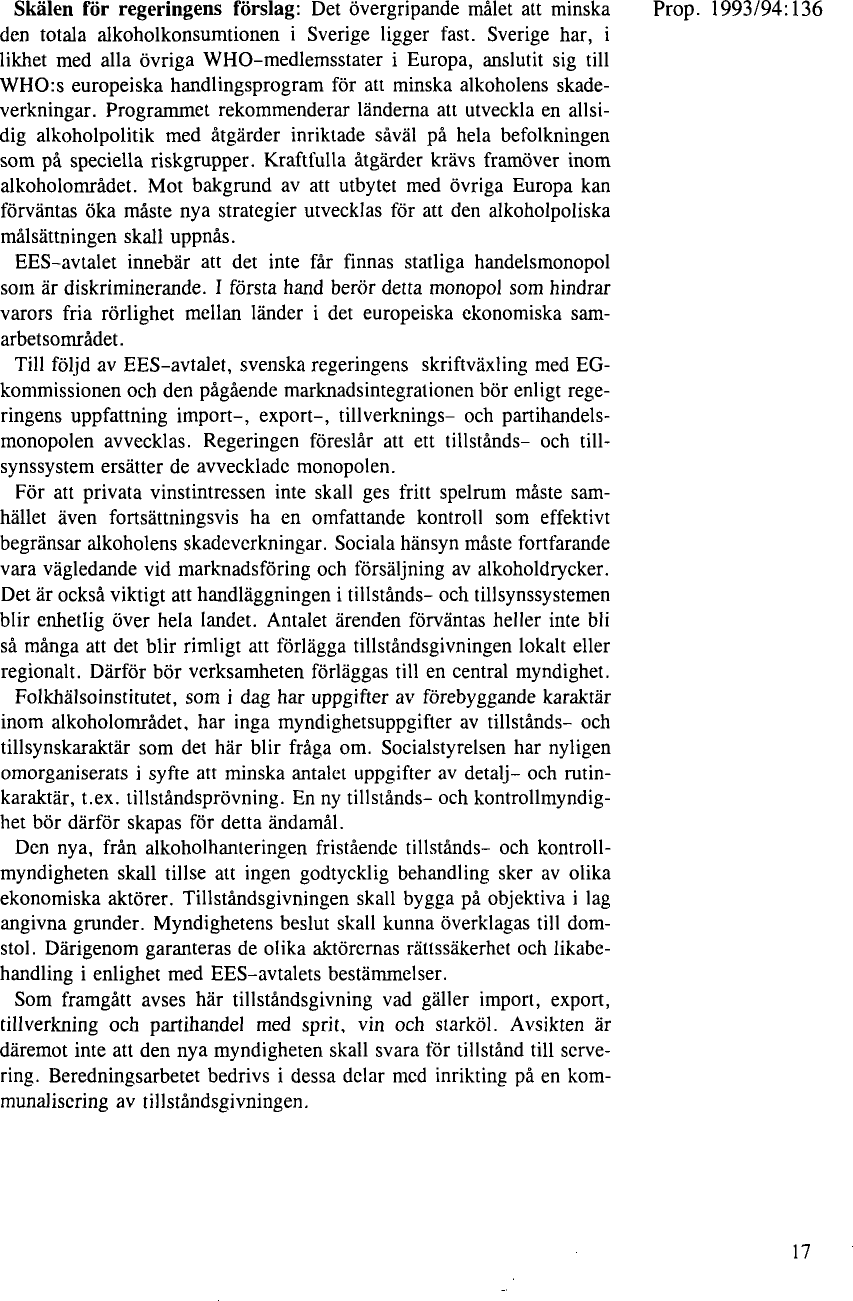 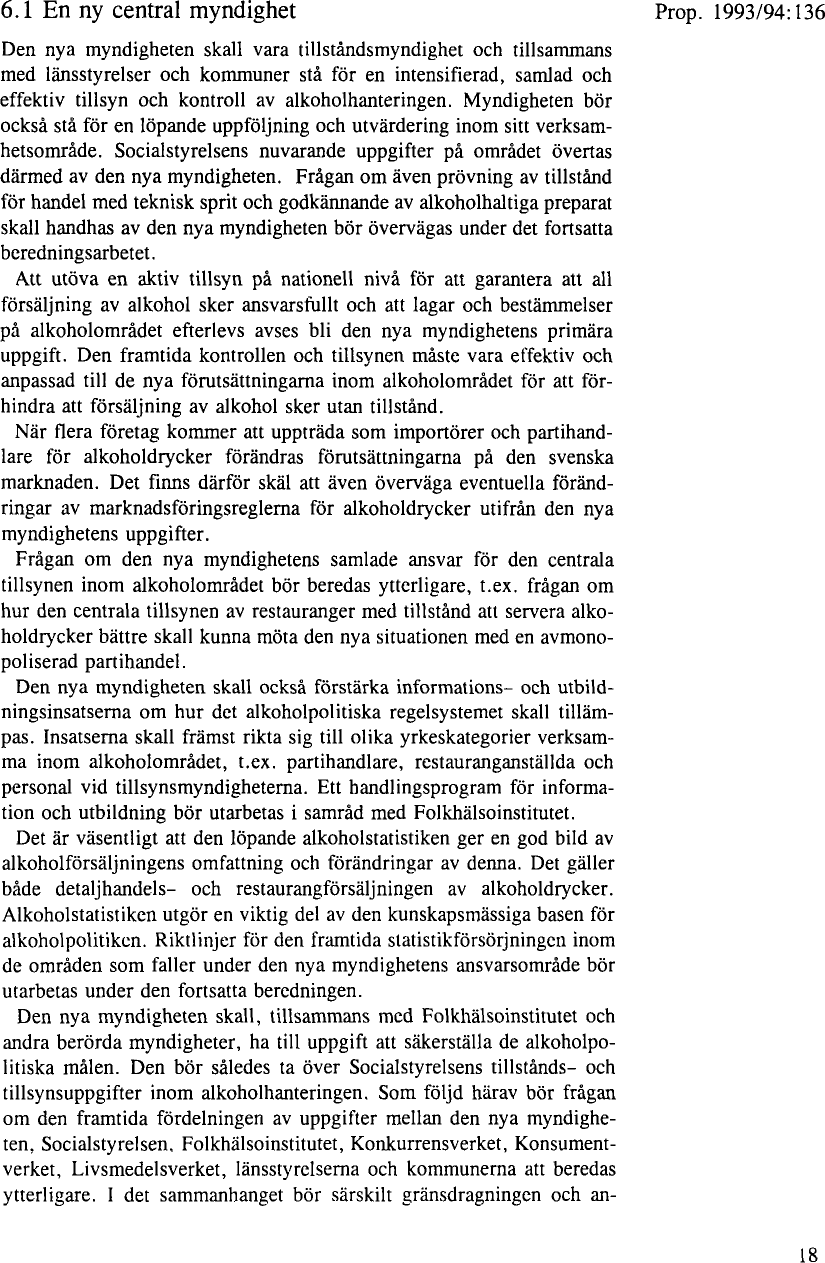 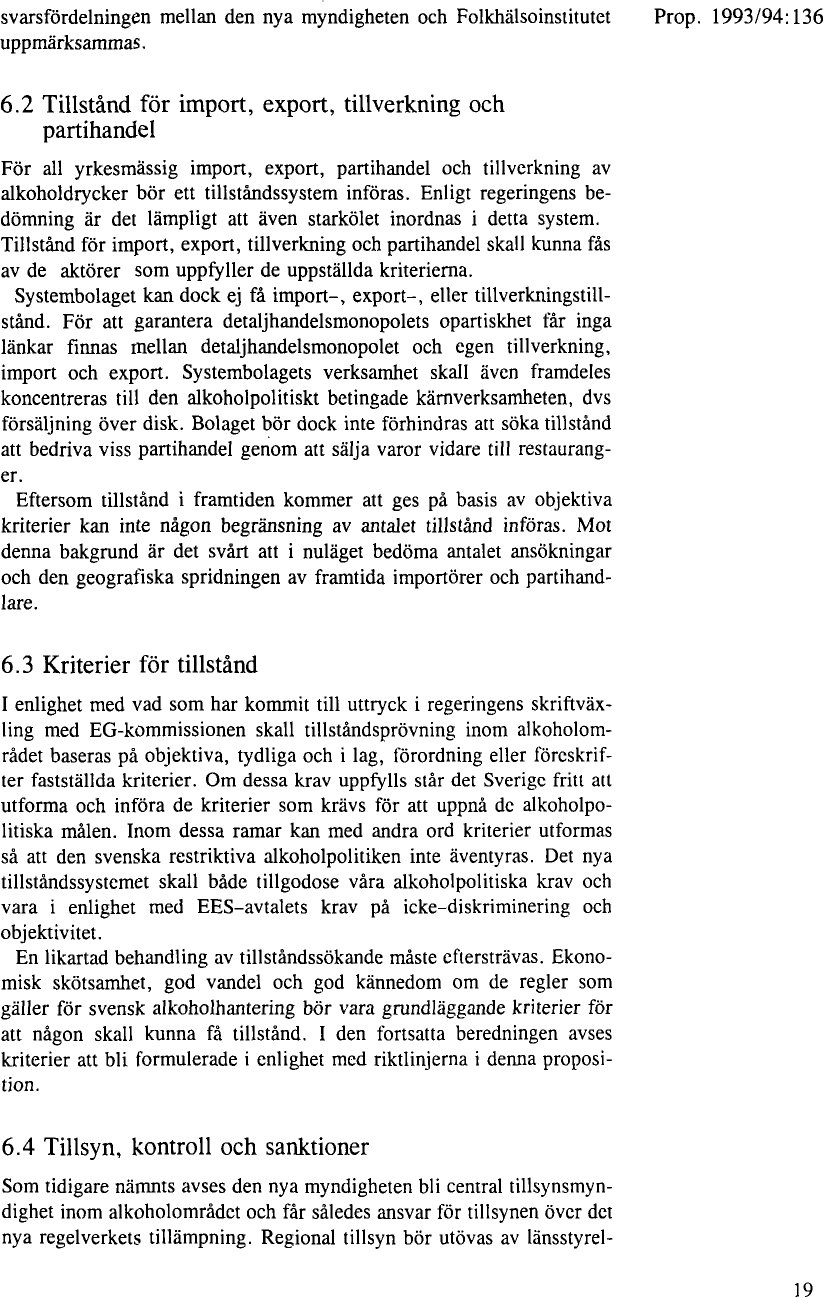 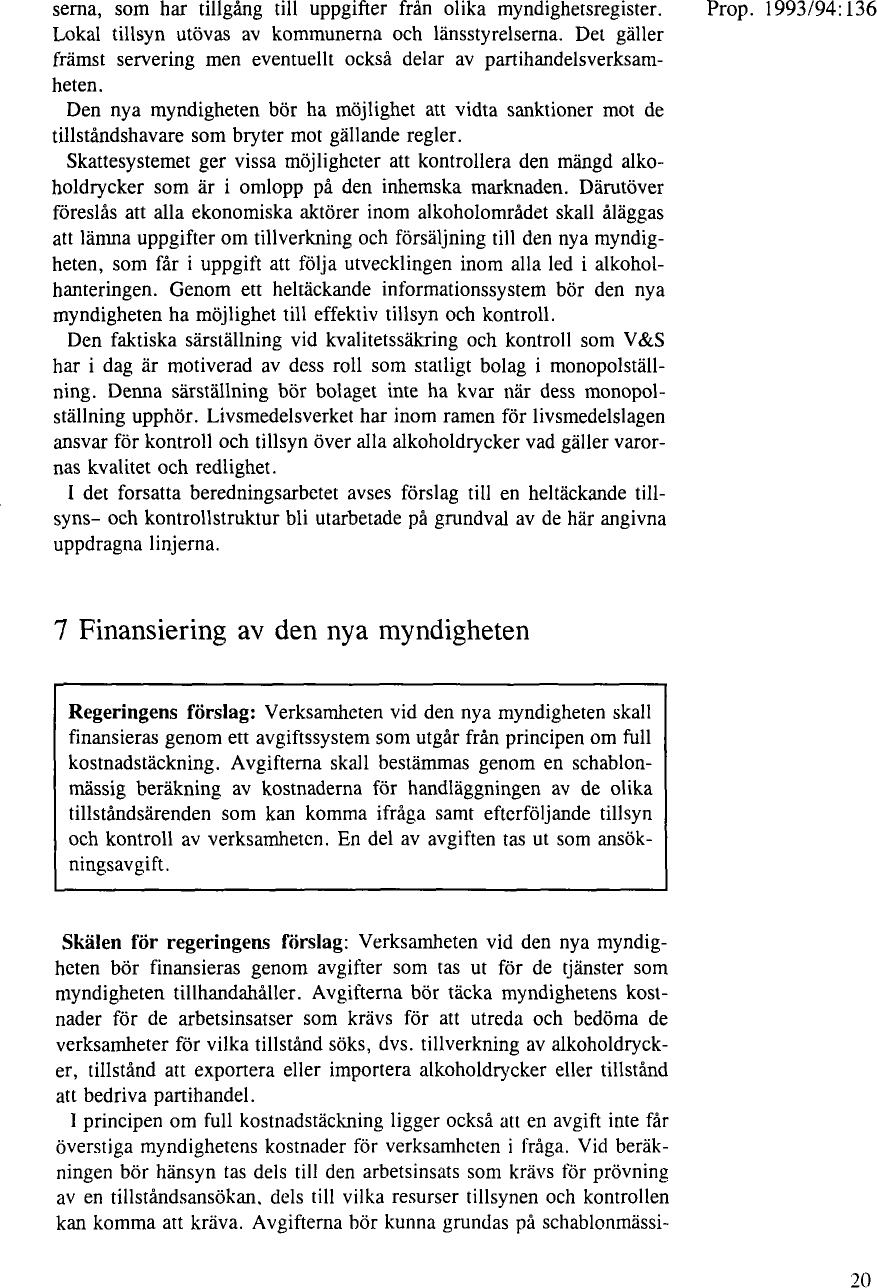 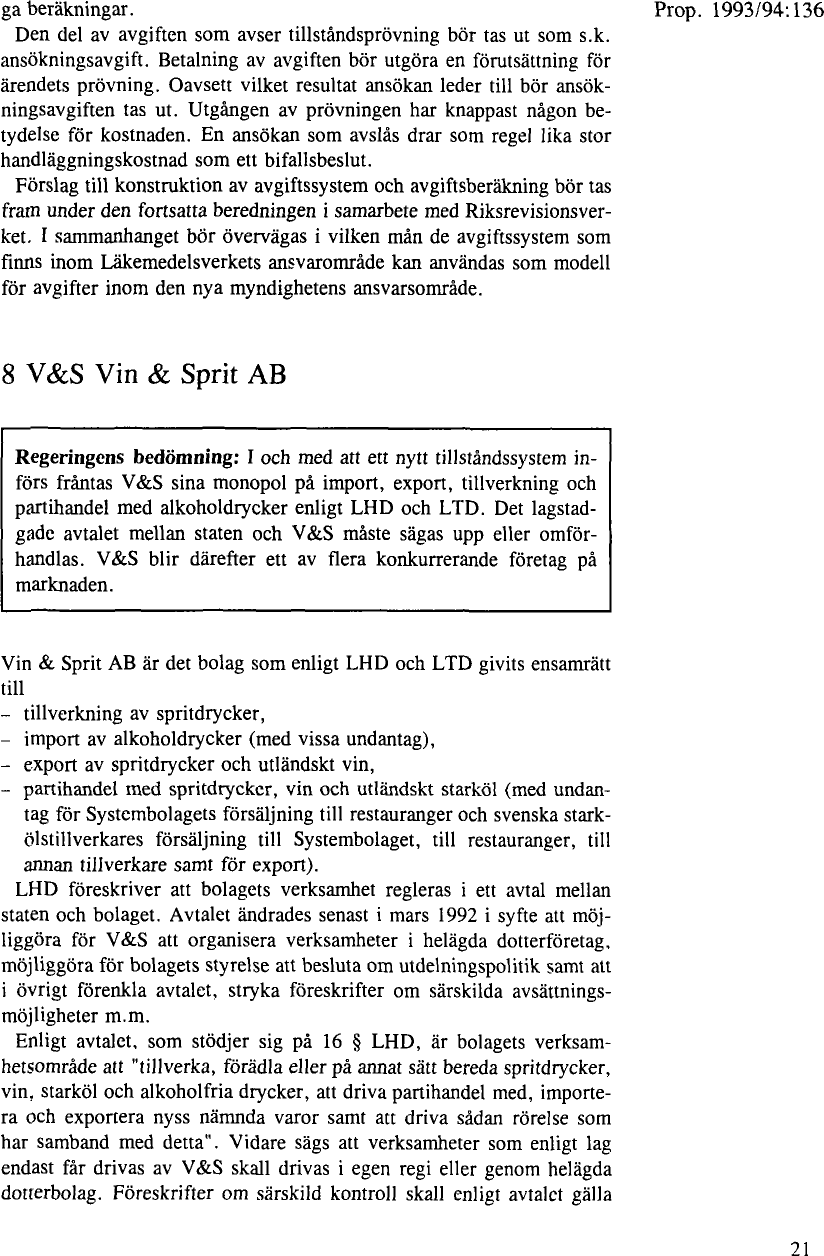 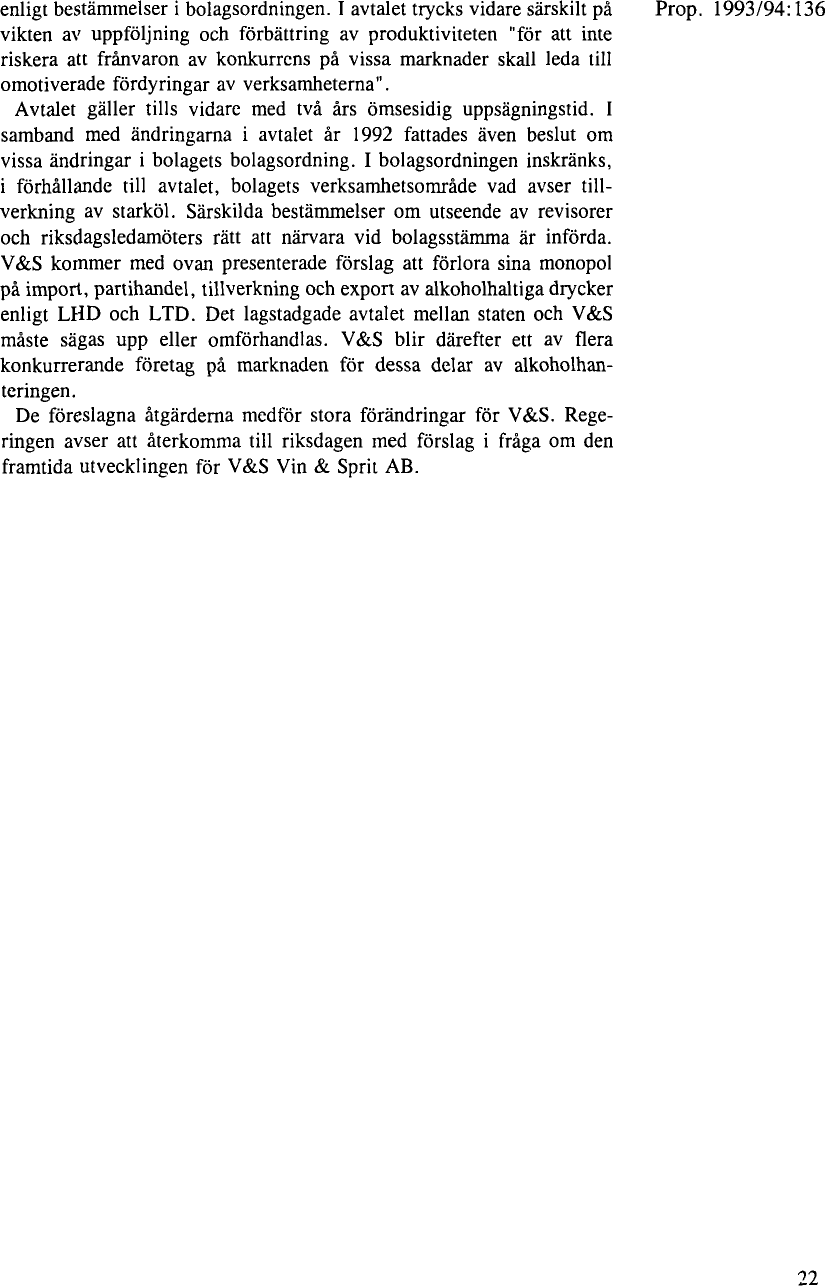 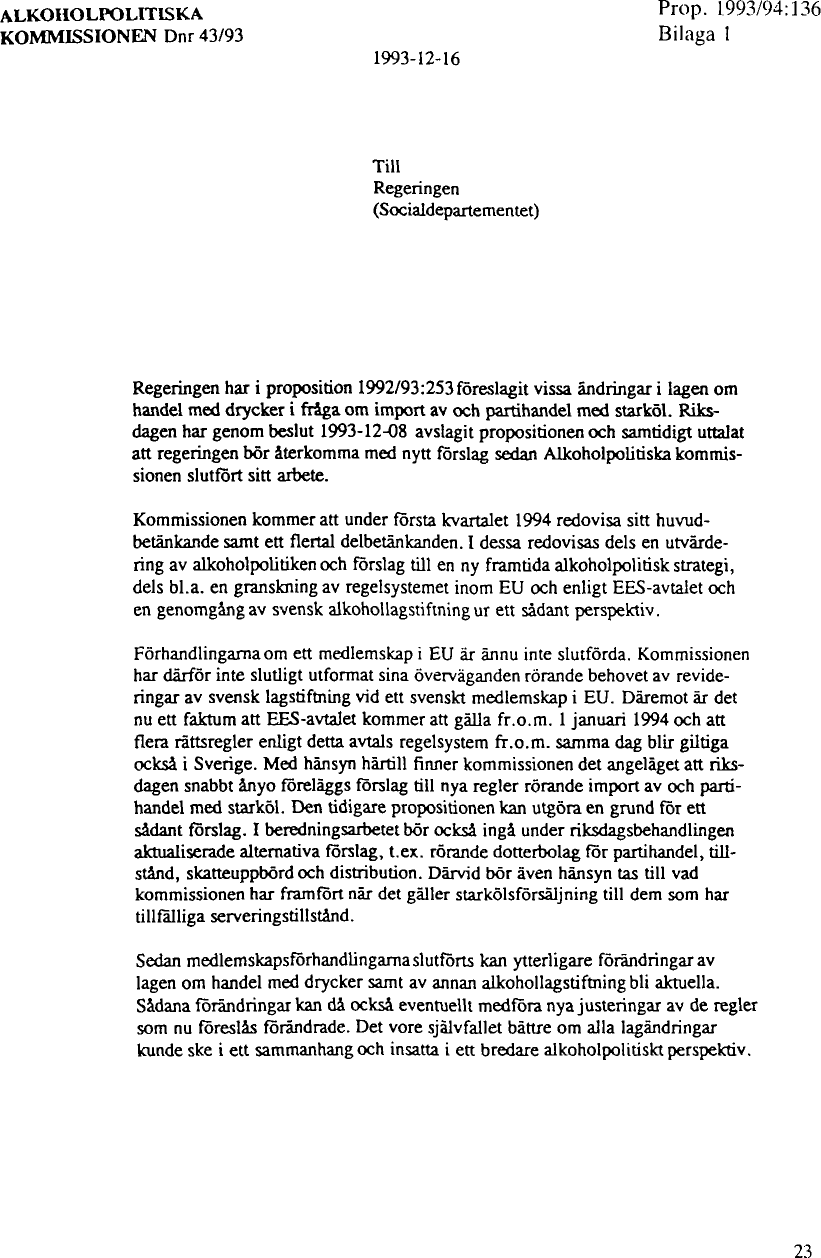 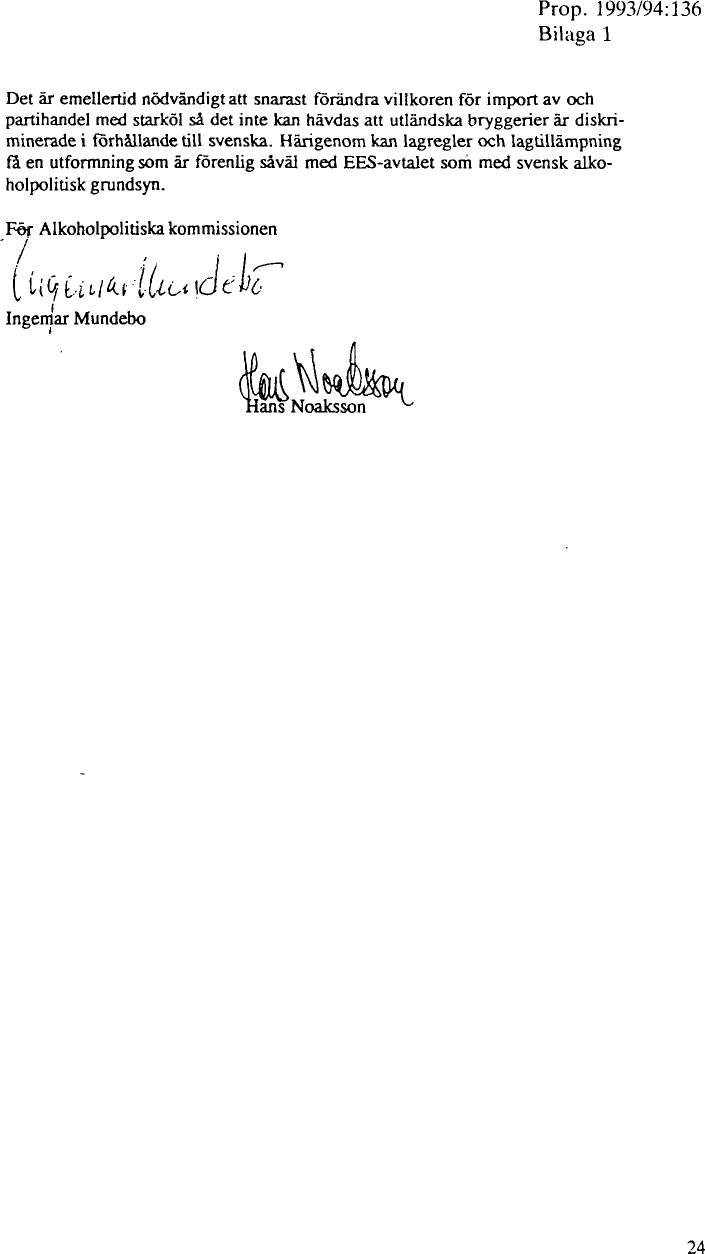 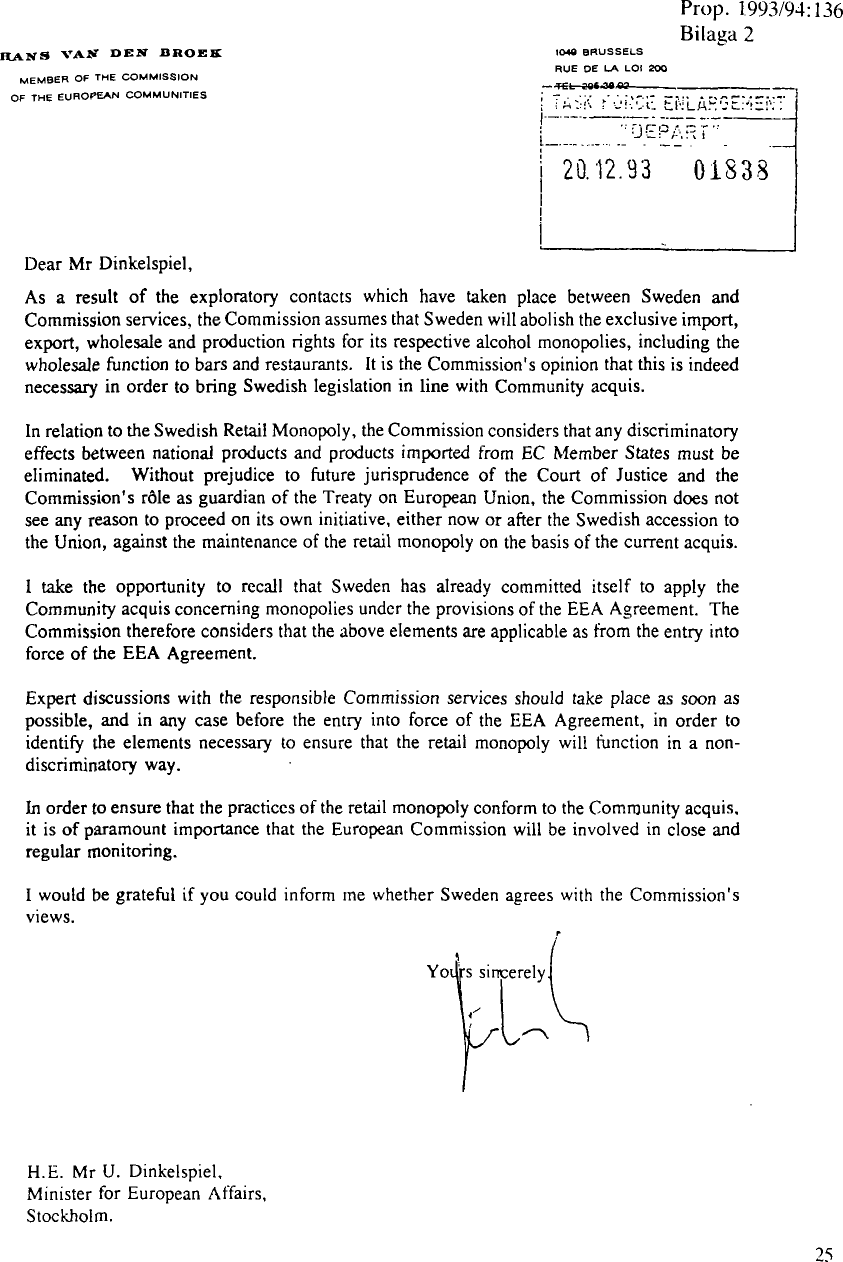 MEMBER OF THE COMMISSION OF THE EUROPEAN COMMUNITIES

As a result of the exploratory contacts which have taken place between Sweden and Commission services, the Commission assumes that Sweden will abolish the exclusive import, export, Wholesale and production rights for its respective alcohol monopolies, including the Wholesale function to bars and restaurants. It is the Commission's opinion that this is indeed necessary in order to bring Swedish legislation in line with Community acquis. Dear Mr Dinkelspiel,

In relation to the Swedish Retail Monopoly, the Commission considers that any discriminatory effects between national products and products imported from EC Member States must be eliminated. Without prejudice to future jurisprudence of the Court of Justice and the Commission's röle as guardian of the Treaty on European Union. the Commission does not see any reason to proceed on its own initiative. either now or after the Swedish accession to the Union, against the maintenance of the retail monopoly on the basis of the current acquis.

l take the opportunity to recall that Sweden has already committed itself to apply the Community acquis concerning monopolies under the provisions of the EEA Agreement. The Commission therefore considers that the above elements are applicable as from the entry into force of the EEA Agreement.

Expert discussions with the responsible Commission services should take place as soon as possible, and in any case before the entry into force of the EEA Agreement, in order to identify the elements necessary to ensure that the retail monopoly will function in a non- discriminatory way. -

In order to ensure that the practices of the retail monopoly conform to the Community acquis. it is of paramount importance that the European Commission will be involved in close and regular monitoring.

I would be grateful if you could inform me whether Sweden agrees with the Commission's views. 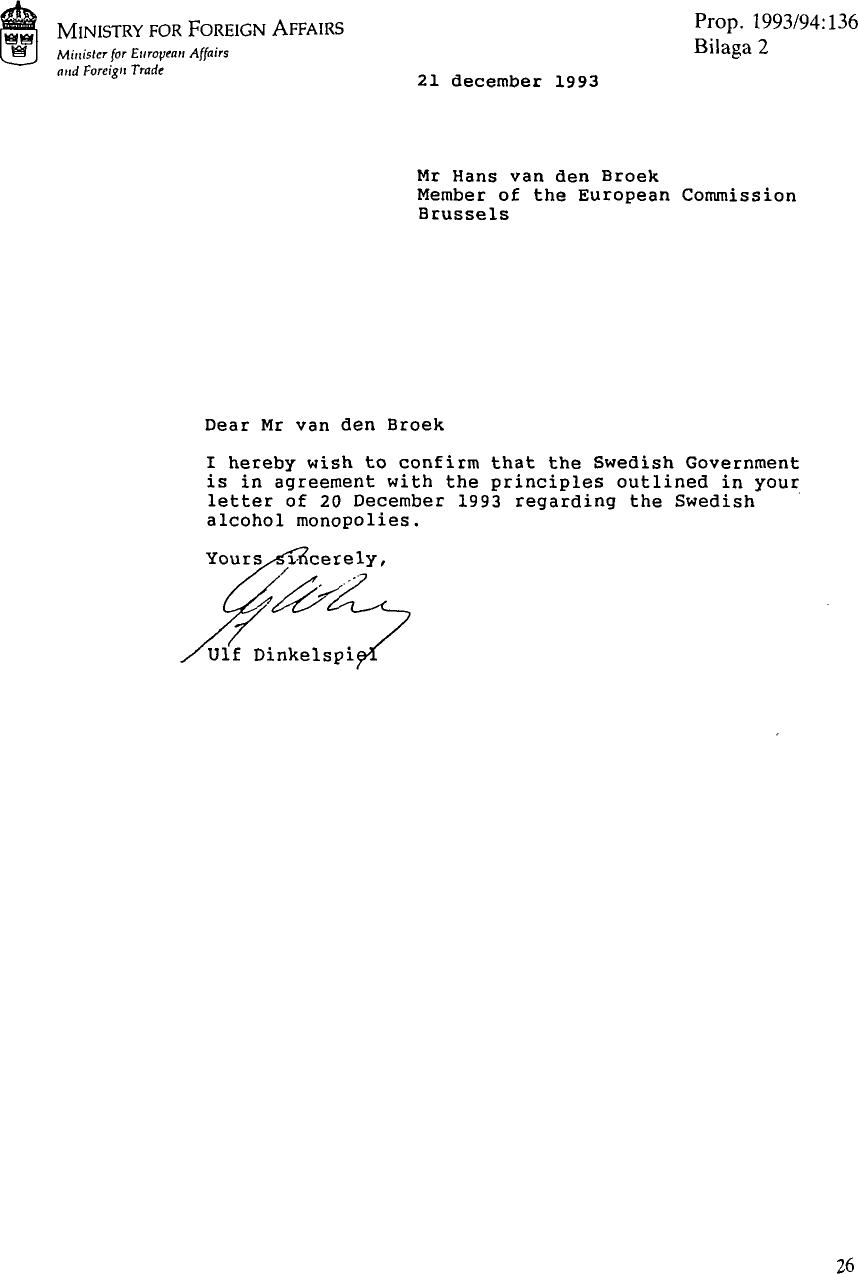 I hereby wish to confirm that the Swedish Government is in agreement with the principles outlined in your letter of 20 December 1993 regarding the Swedish alcohol monopolies. 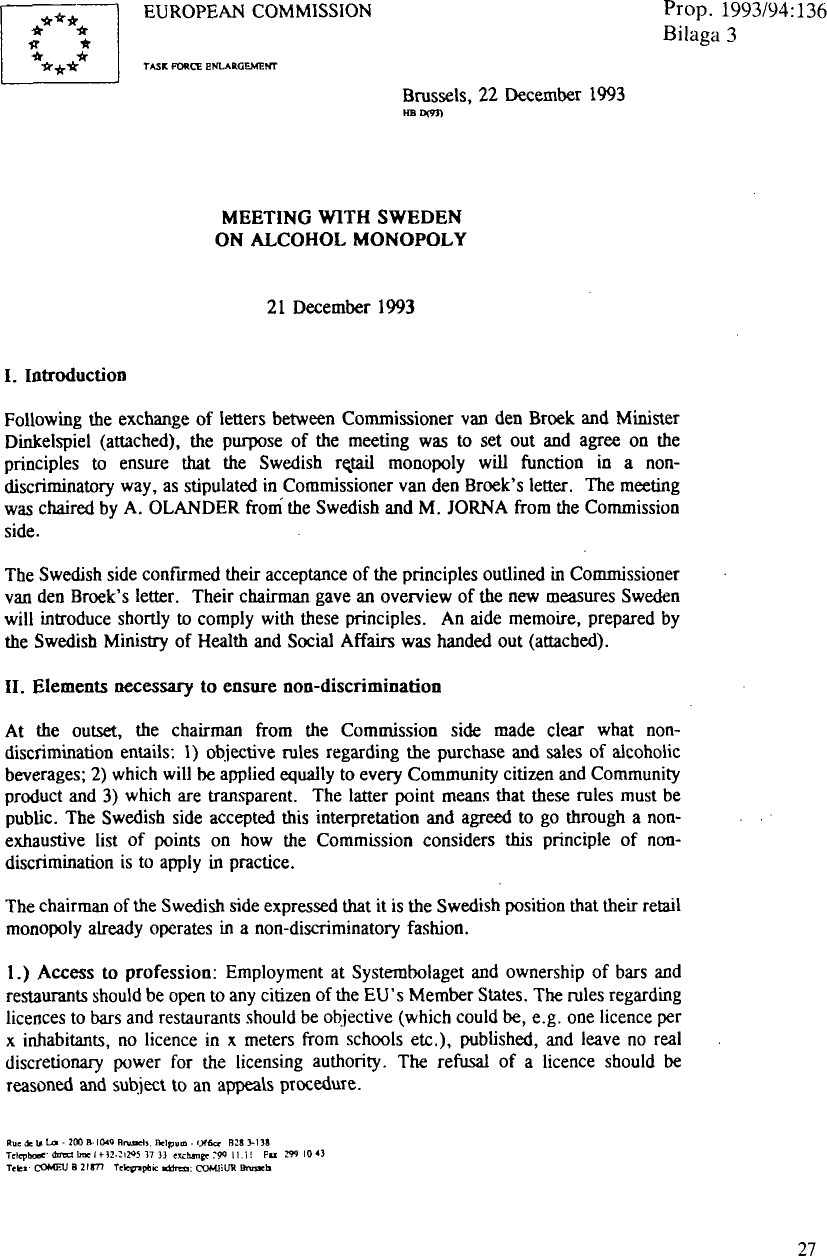 MEETING WITH SWEDEN ON ALCOHOL MONOPOLY

Following the exchange of letters between Commissioner van den Brock and Minister Dinkelspiel (attached), the purpose of the meeting was to set out and agree on the principles to ensure that the Swedish retail monopoly will function in a non- discriminatory way, as stipulated in Cornmissioner van den Broek's letter. The meeting was chaired by A. OLANDER from the Swedish and M. JORNA from the Commission side. .

The Swedish side confirmed their acceptance of the principles outlined in Commissioner van den Broek”s letter. Their chairman gave an overview of the new measures Sweden will introduce shortly to comply with these principles. An aide memoire, prepared by the Swedish Ministry of Health and Social Affairs was handed out (attached).

At the outset, the chairman from the Commission side made clear what non— discrimination entails: l) objective rules regarding the purchase and sales of alcoholic beverages; 2) which will be applied equally to every Community citizen and Community product and 3) which are transparent. The latter point means that these rules must be public. The Swedish side accepted this interpretation and agreed to go through & non- exhaustive list of points on how the Commission considers this principle of non— discrimination is to apply in practice.

The chairman of the Swedish side expressed that it is the Swedish position that their retail monopoly already operates in a non-discriminatory fashion.

l.) Access to profession: Employment at Systembolaget and ownership of bars and restaurants should be open to any citizen of the EU's Member States. The rules regarding licences to bars and restaurants should be objective (which could be, e.g. one licence per x inhabitants, no licence in x meters from schools etc.), published, and leave no real discretionary power for the licensing authority. The refusal of a licence should be reasoned and subject to an appeals procedure. 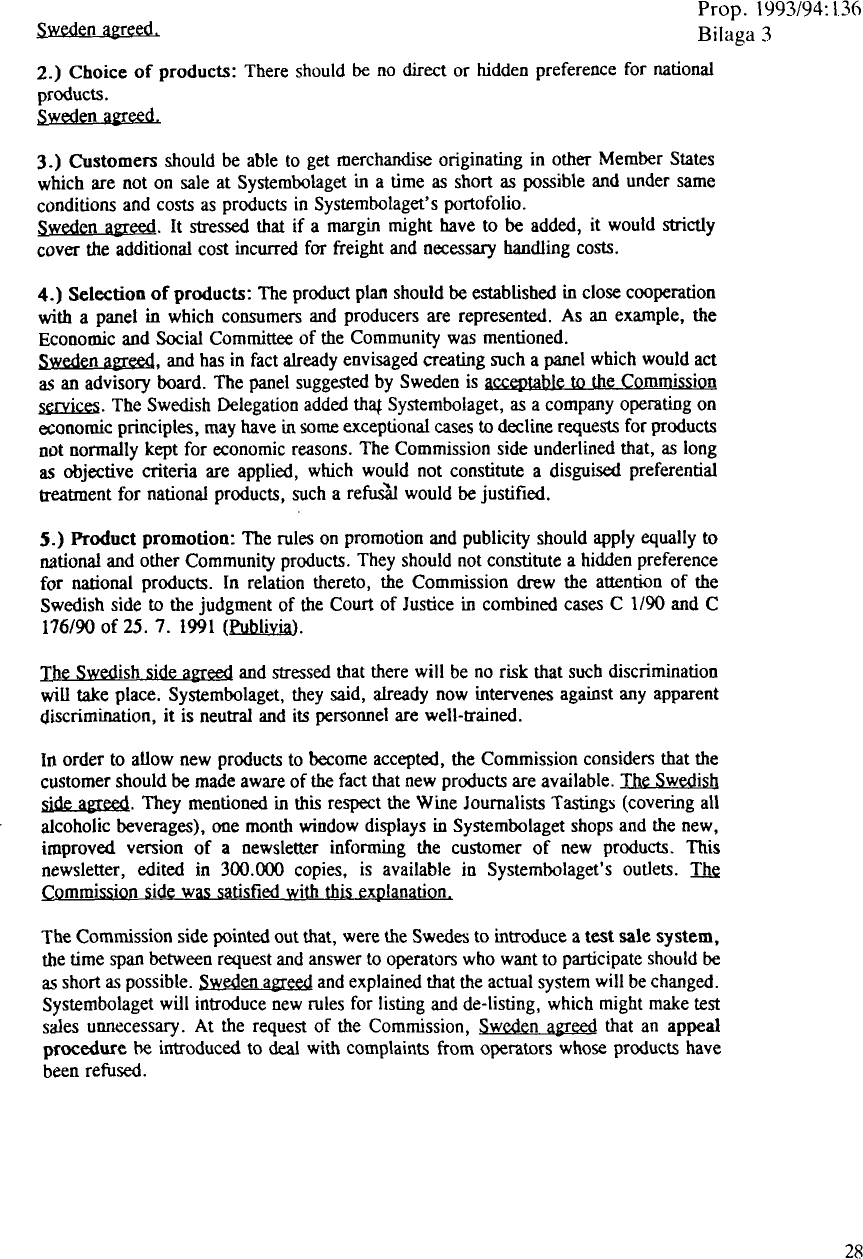 Surdenagtesd. Bilaga 3 2.) Choice of products: There should be no direct or hidden preference for national products. Mum

3.) Customers should be able to get merchandise originating in other Member States which are not on sale at Systembolaget in a time as short as possible and under same conditions and costs as products in Systembolaget's portofolio. MW. It stressed that if a margin might have to be added, it would strictly cover the additional cost incurred for freight and necessary handling costs.

4.) Selection of products: The product plan should be established in close cooperation with a panel in which consumers and producers are represented. As an example, the Economic and Social Committee of the Community was mentioned. Mam, and has in fact already envisaged creating wch a panel which would act as an advisory board. The panel suggested by Sweden is www sentices. The Swedish Delegation added that Systembolaget, as a company operating on economic principles, may have in some exceptional cases to decline requests for products not normally kept for economic reasons. The Commission side underlined that, as long as objective criteria are applied, which would not constitute a disguised preferential treatment for national products, such a refusål would be justified.

5.) Product promotion: The rules on promotion and publicity should apply equally to national and other Community products. They should not constitute a hidden preference for national products. ln relation thereto, the Commission drew the attention of the Swedish side to the judgment of the Court of Justice in combined cases C 1/90 and C 176/90 of 25. 7. 1991 (Emin/ia).

TMM and stressed that there will be no risk that such discrimination will take place. Systembolaget, they said, already now intervenes against any apparent discrimination, it is neutral and its personnel are well-trained.

In order to allow new products to become accepted, the Commission considers that the customer should be made aware of the fact that new products are available. MSI! Mem. They mentioned" in this respect the Wine Journalists Tastings (covering all alcoholic beverages), one month window displays in Systembolaget shops and the new, improved version of a newsletter inforrning the customer of new products. This newsletter, edited in 300.000 copies, is available in Systembolaget's outlets. & mmiinidw tisfredi ' xlntin

The Commission side pointed out that, were the Swedes to introduce a test sale systern, the time span between request and answer to operators who want to participate should be as short as possible. Magma and explained that the actual system will be changed. Systembolaget will introduce new rules for listing and de-listing, which might make test sales unnecessary. At the request of the Comnrission, Sgt-den_agrm that an appeal procedure be introduced to deal with complaints from operators whose products have been refused. 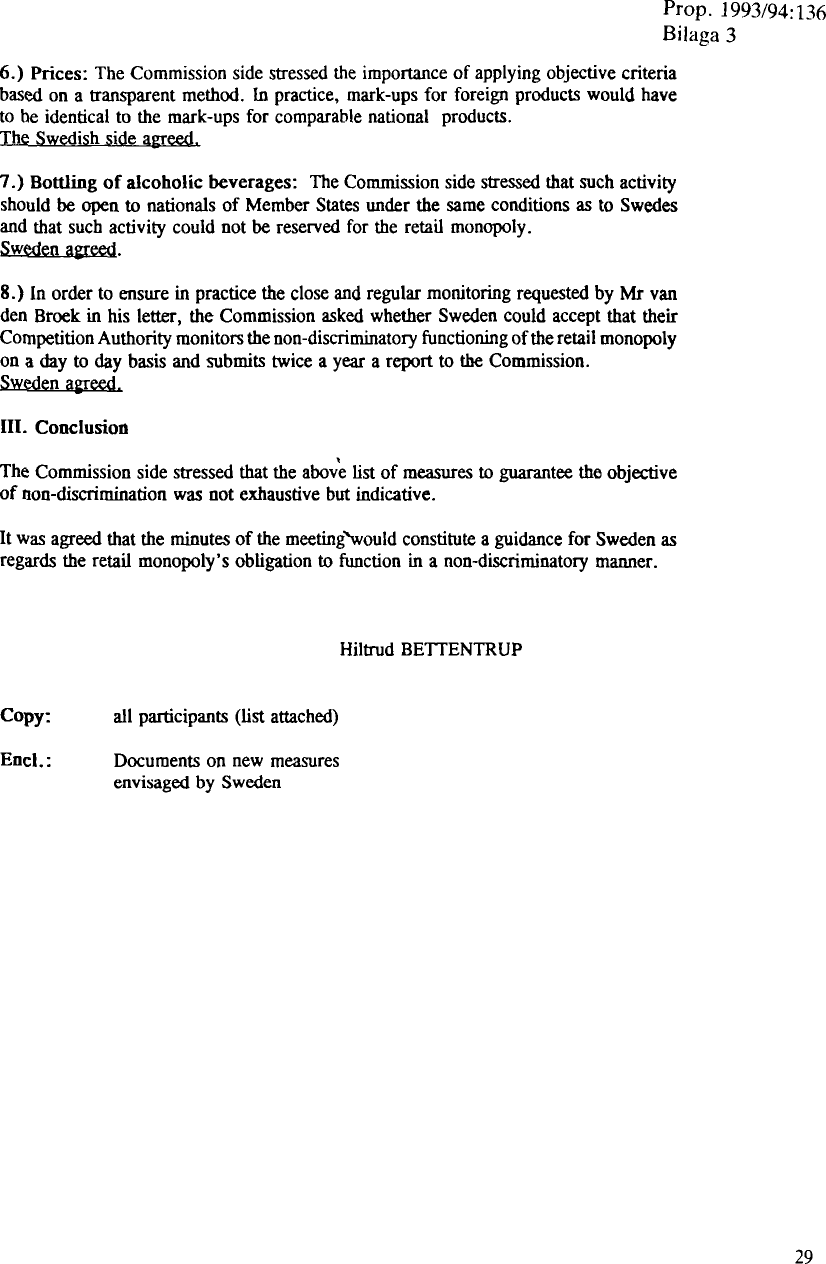 6.) Prices: The Commission side stressed the importance of applying objective criteria based on a transparent method. ln practice, mark-ups for foreign products would have to be identical to the mark-ups for comparable national products. Limmasidem

8.) In order to ensure in practice the close and regular monitoring requested by Mr van den Brock in his letter, the Commission asked whether Sweden could accept that their Competition Authority monitors the non-discriminatory functioning of the retail monopoly on a day to day basis and submits twice a year a report to the Commission.

The Commission side stressed that the above list of measures to guarantee the objective of non-discrimination was not exhaustive but indicative.

It was agreed that the minutes of the meeting*would constitute a guidance for Sweden as regards the retail monopoly's obligation to function in a non-discriminatory manner.

.M to the anamma-' fu'nc'tibniug of the respecuve real monopolies,- : rrreehng. . .has': tiken pings". between 'the, commission senda; 3251 the Swedish and Finnish . authorities. All sides have agreed ort the" interpretation of this. principle Which wili be.. 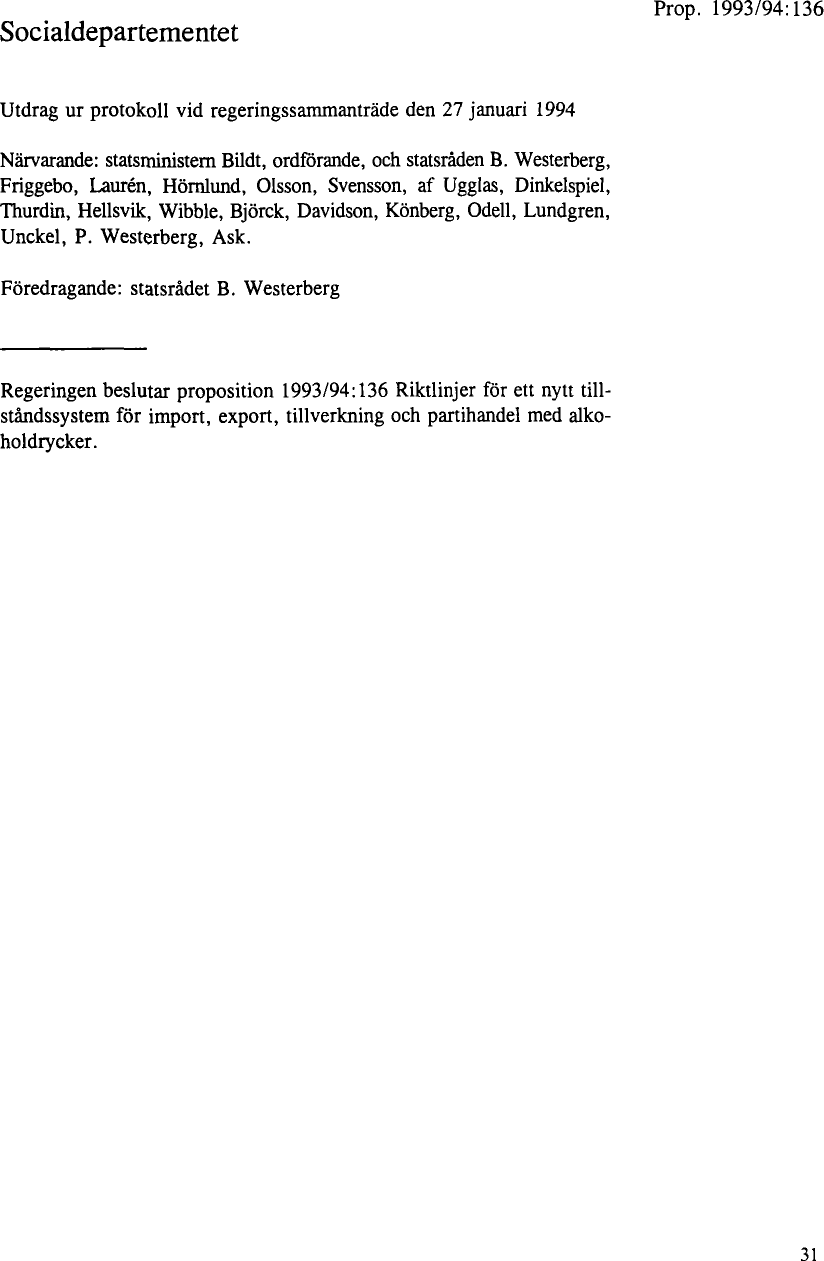 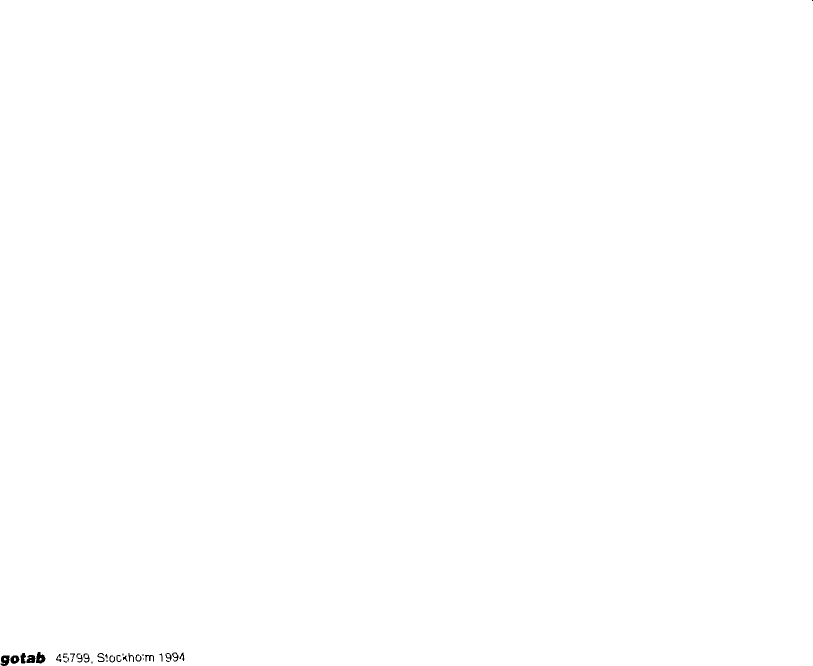